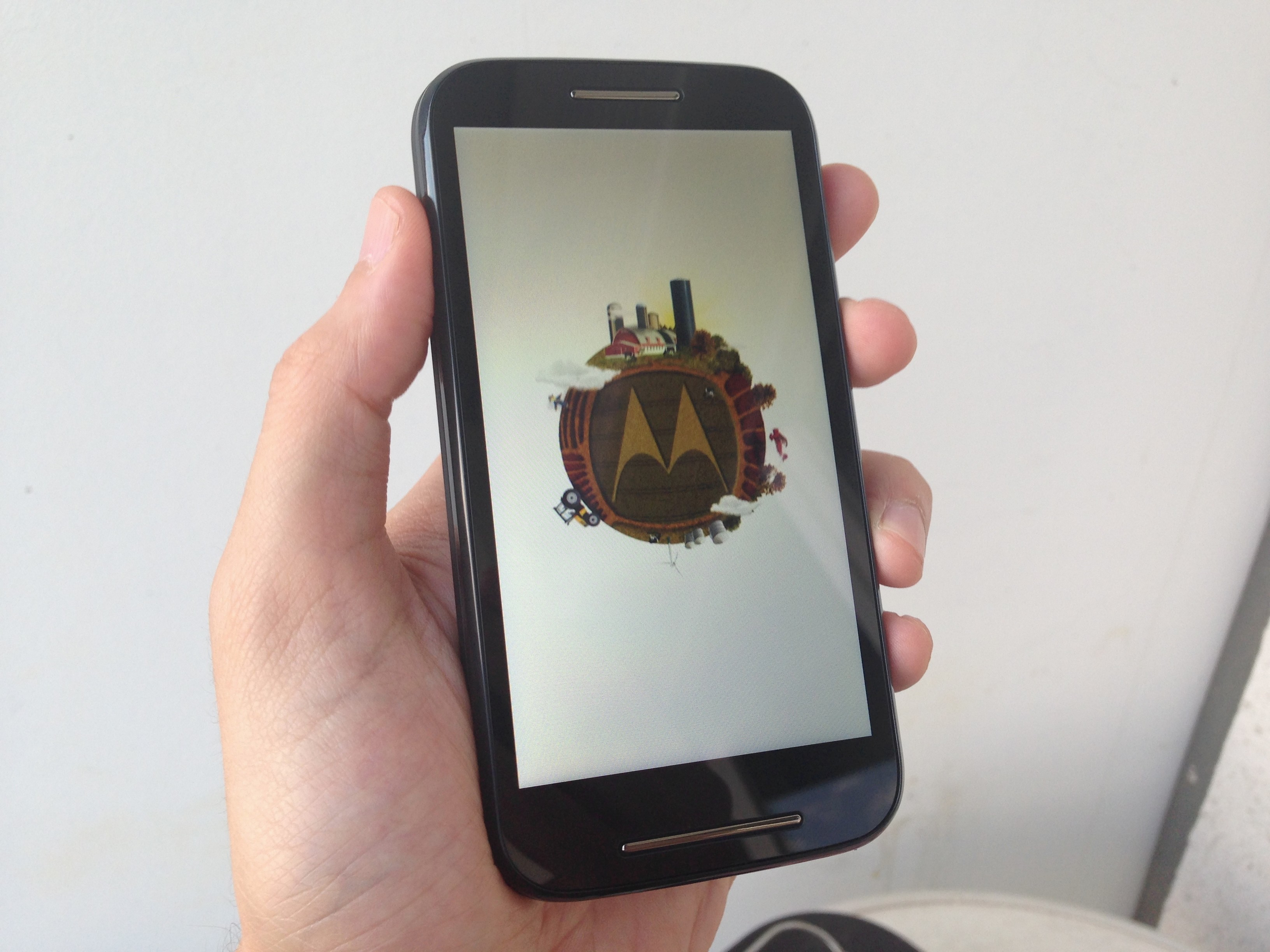 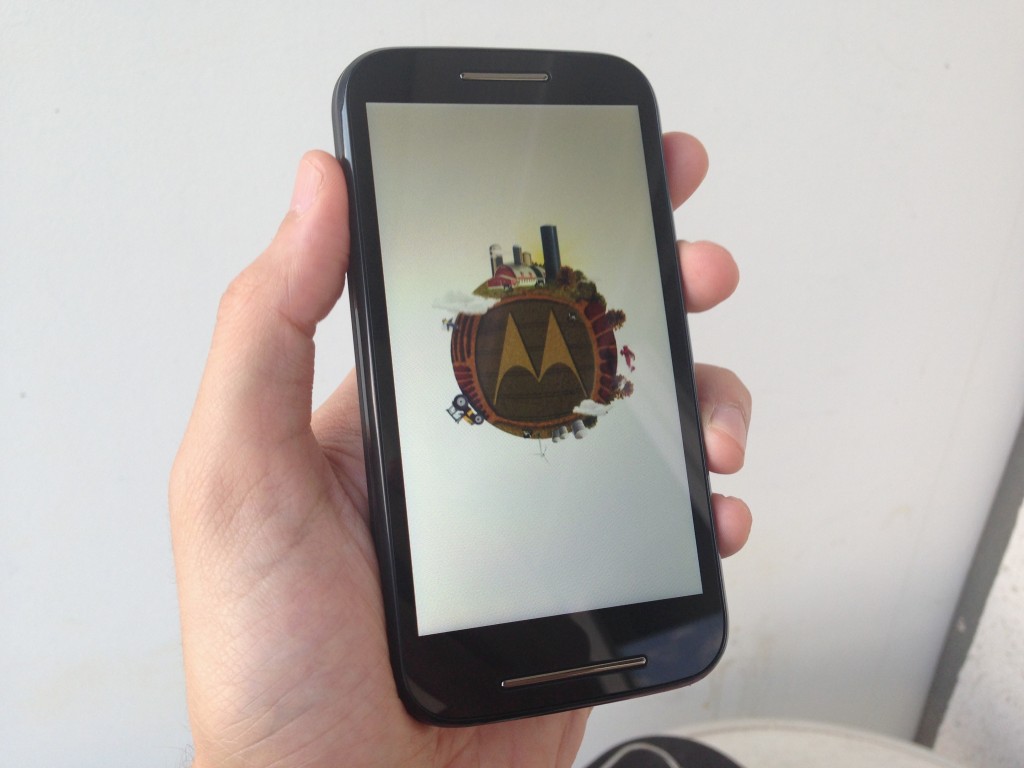 It was a coincidence that got a Moto E in my hands. A relative wanted a cheap device to use until she could get an iPhone 6 when it’s out, so I researched a little bit and came up with the Moto E as it looked like a good deal. I have to admit that if it wasn’t for this circumstances I probably would have never really taken a closer look at this device, because based on the specs and price tag I wouldn’t expect anything particular interesting.

But I was wrong. Motorola made a great effort with the Moto X and continued their success with the Moto G, which became the best selling Motorola smartphone ever due to it’s sheer value. Now they went one step further with the Moto E by going to the <150 $ price segment. All smartphone vendors are looking for the next billion users in emerging markets, and in those countries even the Moto G would be too expensive for the average customer. This is why Motorola introduced the Moto E, in order to give those people a fully functional quality smartphone instead of cheap trash.

Up to now I didn’t review the Moto X or G so the Moto E is actually my first real contact the Motorolas new smartphone line. And the initial impression was very positive. I love how the Moto E feels in your hand and it was quite a revelation to finally have a smartphone that is not as huge as nowadays flagships but still has a larger screen than an iPhone 5. 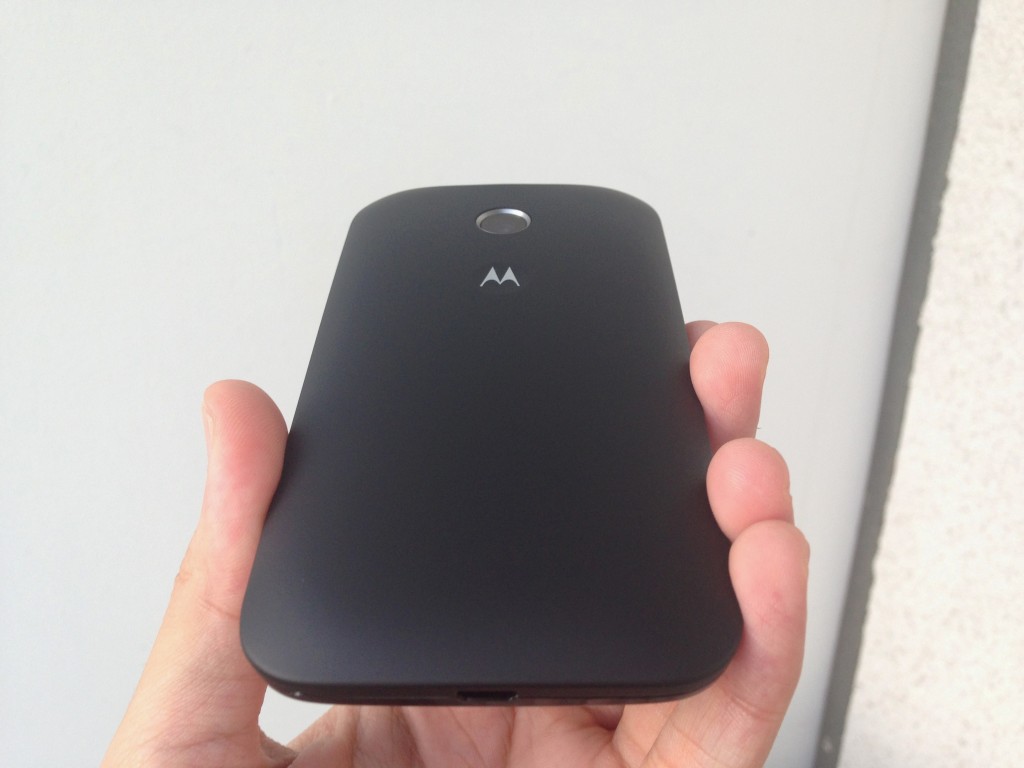 The back is made of soft touch material which I prefer to Samsung’s high gloss plastic. I really like the matte black color, even though fingerprint can be seen pretty easily on it. There is also a small Motorola logo on the center and the camera (without flash). Opening the cover is a little bit of a hassle, especially if you plan to use a micro sd card which you want to swap frequently. But at least you have the option for a micro sd card at all, which means that you can easily expand the storage from 4GB to 36GB with a 32GB card. 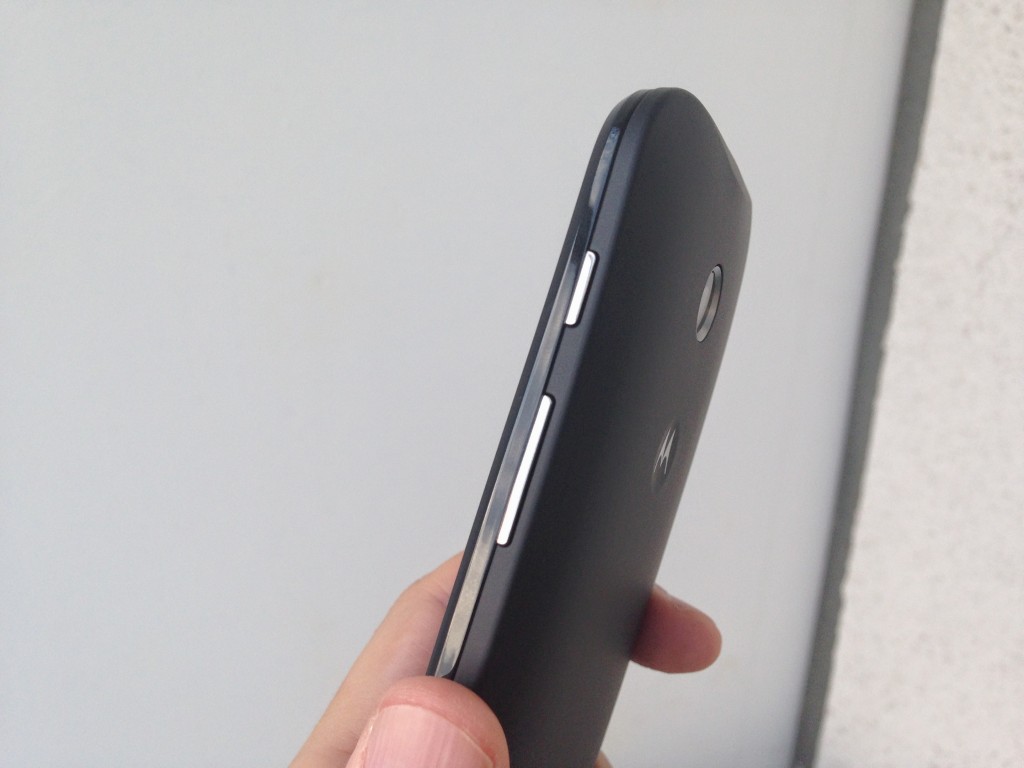 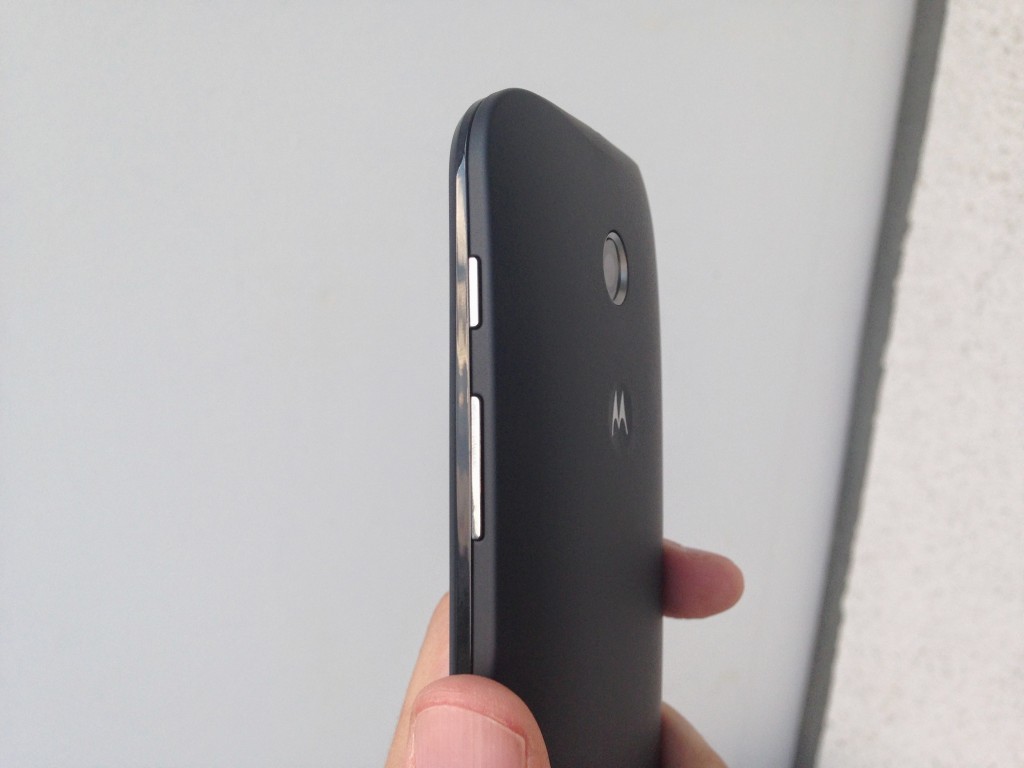 You can find the power and volume buttons on the side. Both buttons feel sturdy and give good feedback when pressed. I still wonder when HTC will finally put the power button on the side of their phones, but I have the feeling that this will never happen. 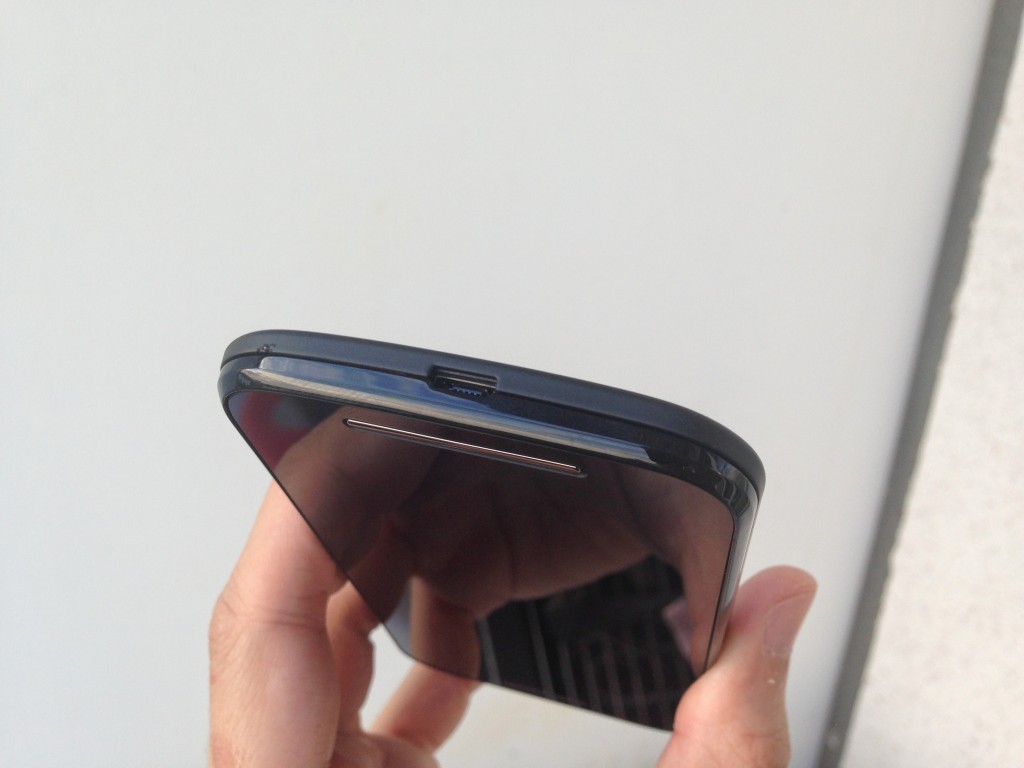 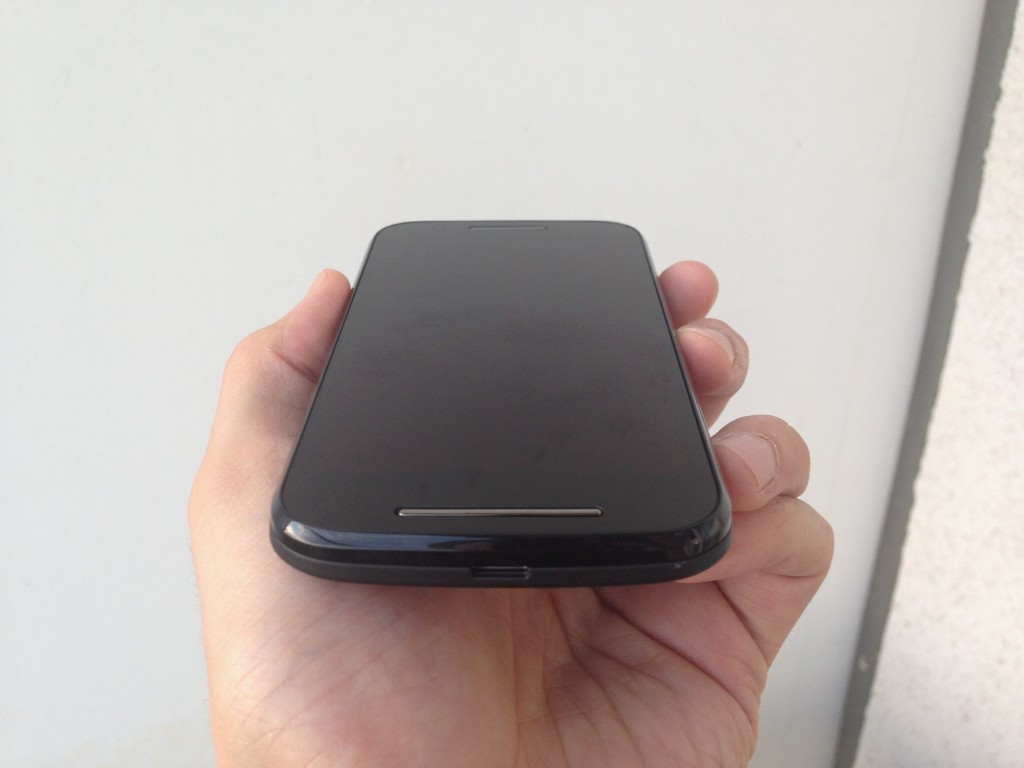 On the bottom you’ll find the micro USB slot. The Moto E is shipped with an micro USB cable but no charger, which on one hand keeps the costs down and on the other hand is a nice move regarding minimum waste production. I think all of us have plenty of chargers and cables left at home from other devices, so we really don’t need a new charger with every tech gadget we get. 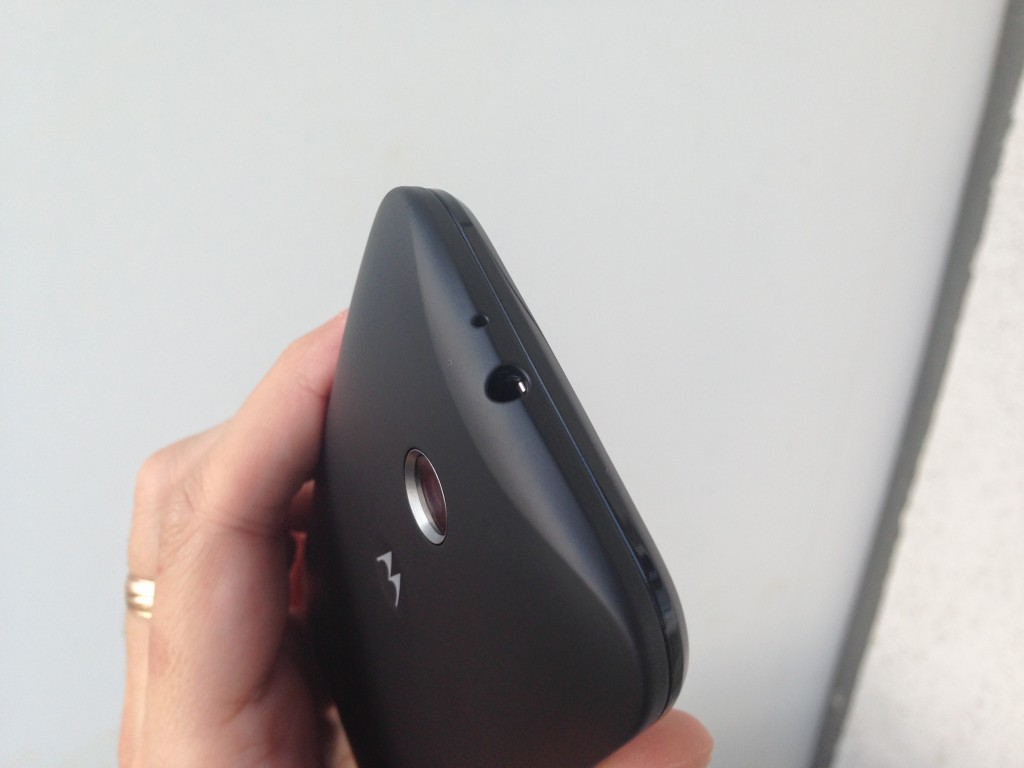 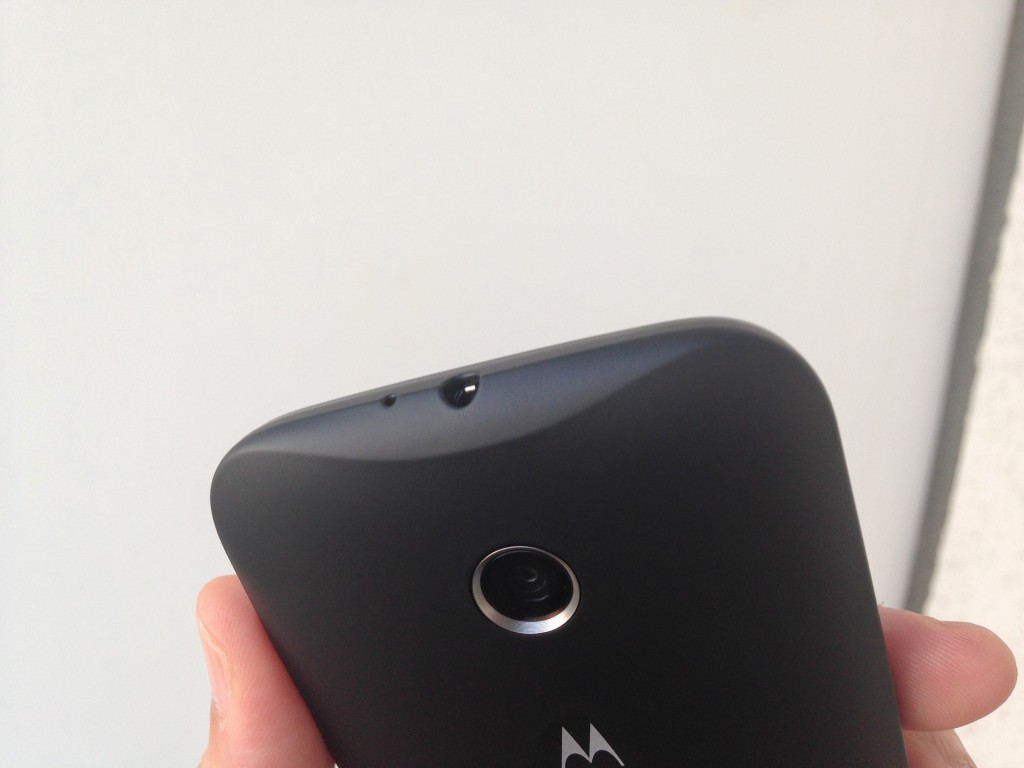 Like most other devices the earphone plug is placed at the top of the device, which is okay but I still prefer it at the bottom.

With the extremely low price tag Motorola couldn’t integrate a full HD screen, which is no surprise. But you still get qHD with good color reproduction and while the screen certainly looks a bit pixelated it’s still very usable and pretty impressive considering the price tag, as other manufacturers low-end smartphones usually have much lower resolutions. 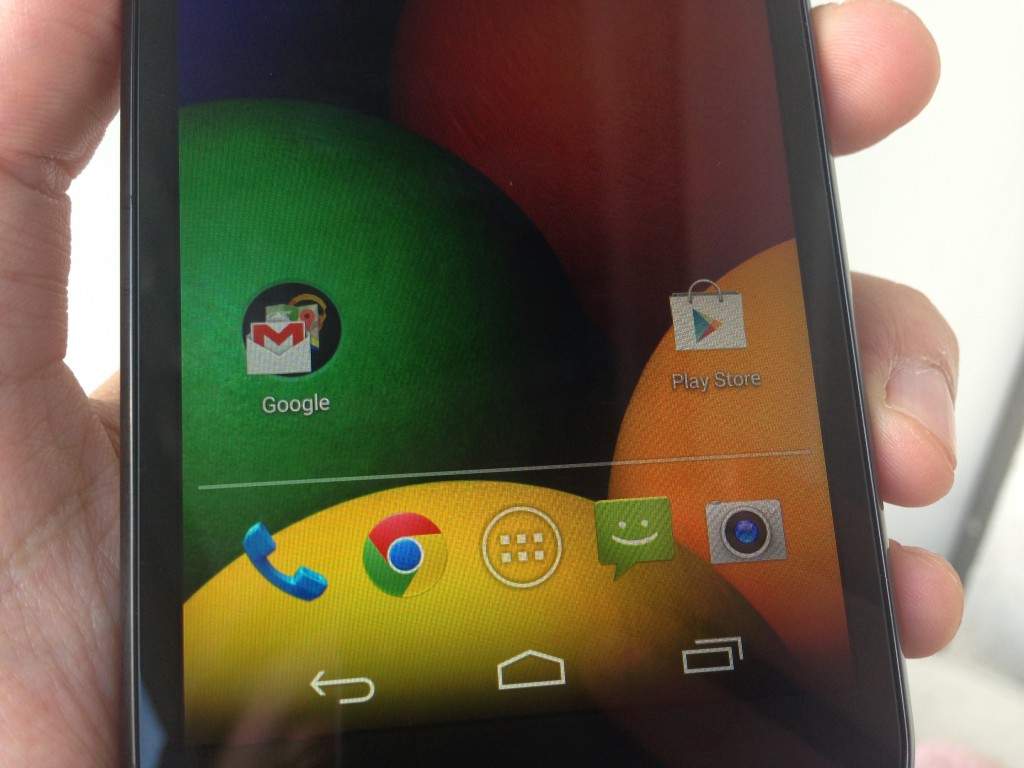 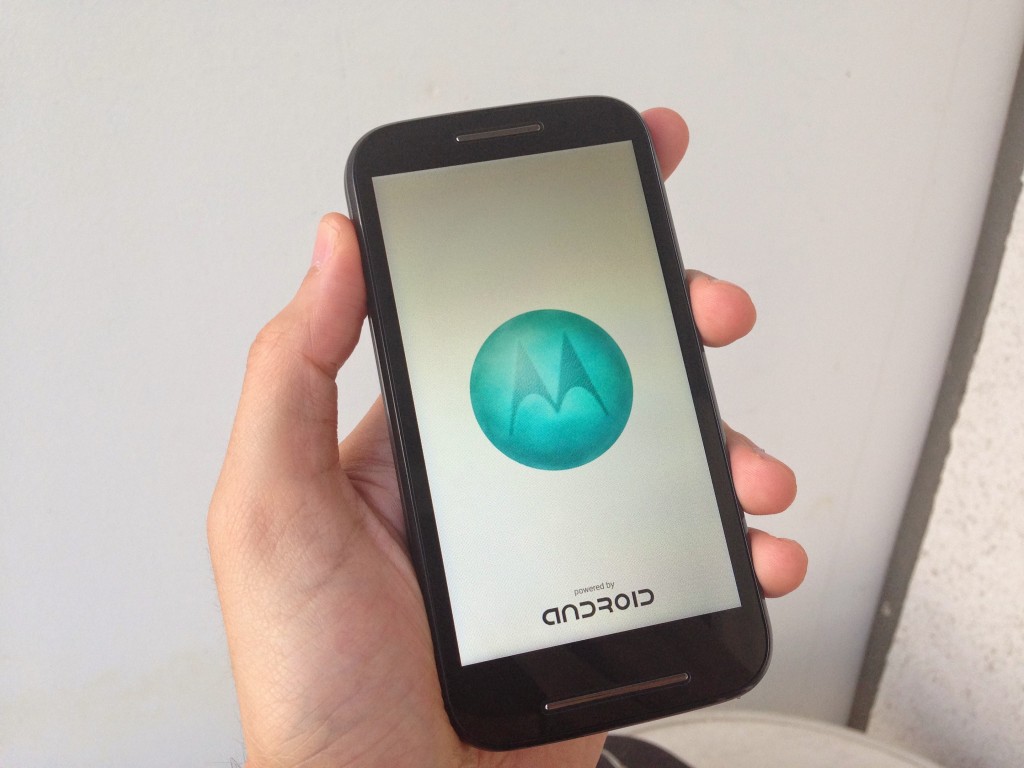 Having a qHD resolution also helps the CPU to process things more easily as there are less pixels to calculate, so in this case it’s for the better to have a lower resolution screen compared to high-end devices given the fact that the phones CPU and RAM wouldn’t be up to the task of HD rendering.

If there is a real weak spot besides the low internal storage it has to be camera. The Moto E comes with a pretty poor 5 megapixel camera without flash. This results in at best average pictures in daylight and basically unusable pictures in dark surroundings. So if taking snapshots is one of your priorities then the Moto E is not made for you.

Similar to the Moto G you will find a near stock android 4.4.2 experience with the Moto E. Motorola doesn’t provide an own skin like I. E. HTC Sense but instead goes with a near stock approach. Android on the Moto E is as Google has imagined it. There are only a few Motorola apps pre-installed, but most of them are not that bad and make more sense than reskinning Android just for the sake of doing it. (I’m looking at you Samsung). I was very impressed how good the Moto E manages all the tasks I threw at it. 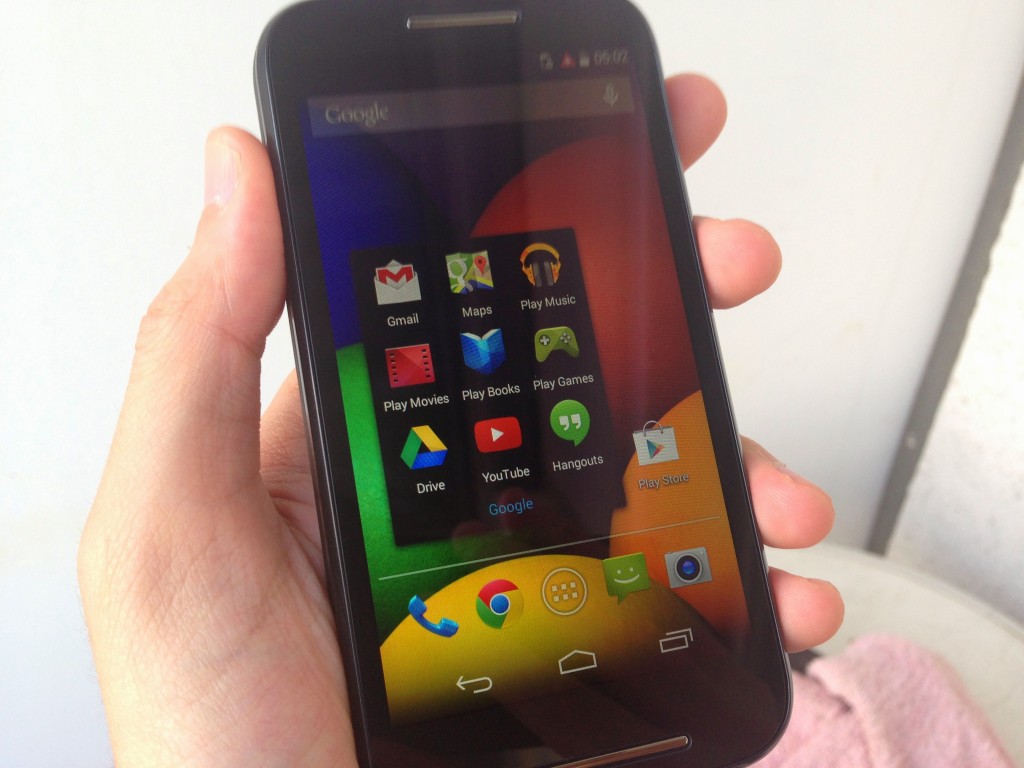 And because Motorola decided to keep Android on the Moto E as clean as possible you will get timely updates and the 4.4.3 version is already being rolled out. This is really unique for an low-end phone, and Motorola deserves praises for that. You essentially have a newer Android version than most smartphones out there with more than 4 times the Moto E price tag.

The Motorola Moto E is a 120 $ smartphone with good build quality, great stock Android experience, nice performance and no unnecessary bloatware. The camera may not be that good and 4GB of internal storage is a joke, but you can use a micro sd card to expand the storage. Furthermore the Moto E has very solid battery lifetime as well as a qHD display which is sharper than all competition in this price range. I guess Motorola just dealt a pretty big blow to all other players looking to get the next billion users. Windows Phones with such an price tag have far worse specs and Firefox OS basically just got killed. Nice job Motorola, I’m really hoping that Lenovo will keep this spirit going in the coming years.