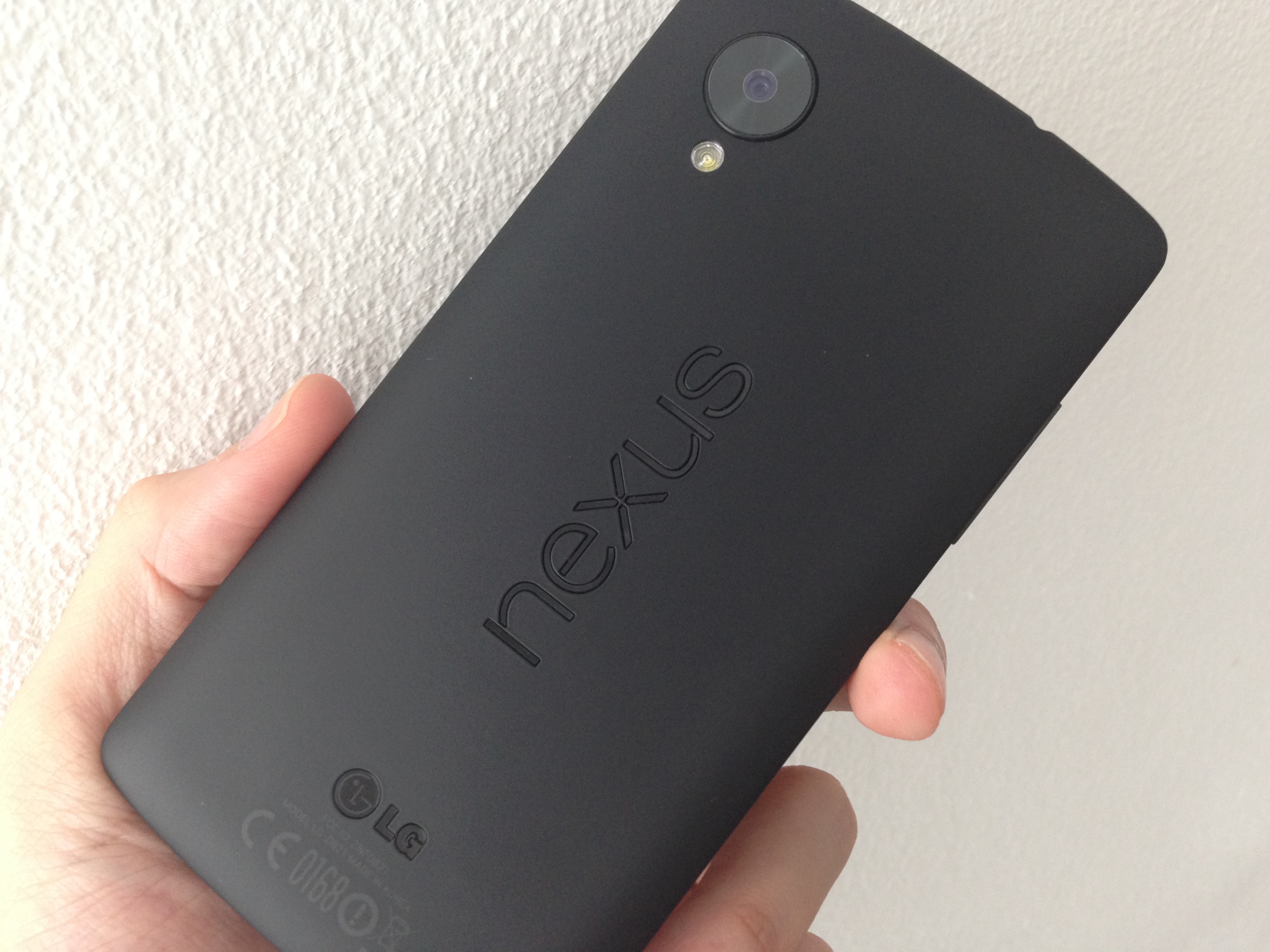 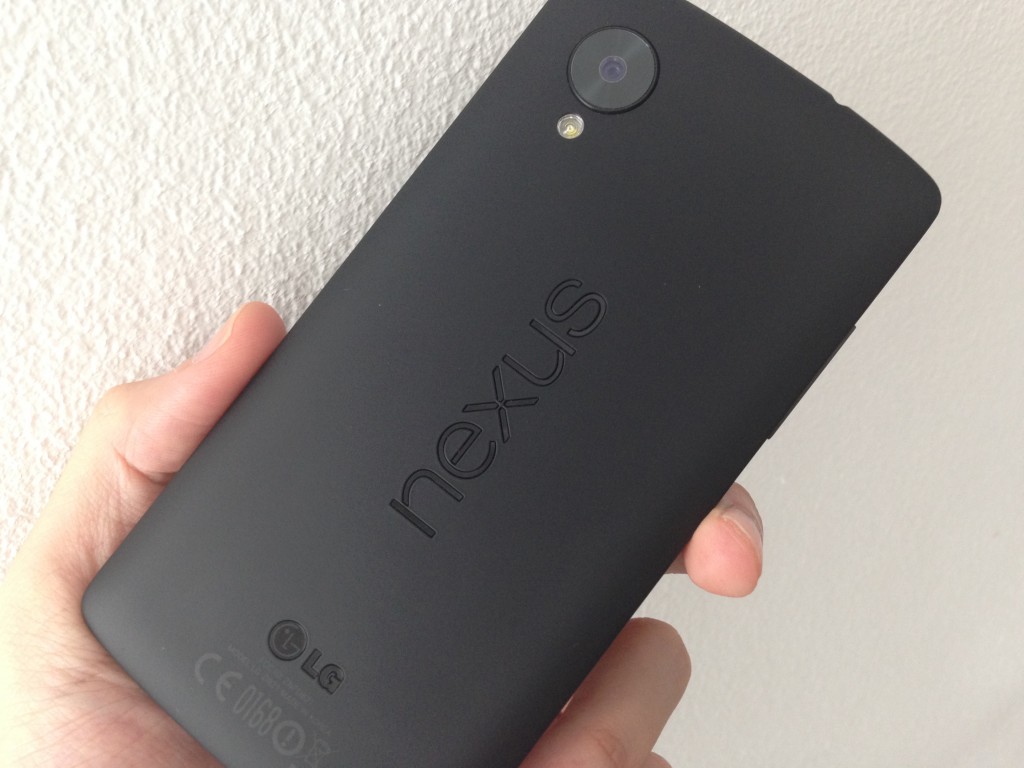 Last year’s Nexus 4 quickly became one of my favorite smartphones of all time, because Google and LG didn’t just manage to produce a very affordable device but also the first one in the Nexus line that didn’t have to hide from the high-end competition in any way. Hardware specs as well as build quality were top notch. I would still recommend it right now to anybody who wants to get a great smartphone without paying the premium price tag of other flagships. But officially Google doesn’t sell it anymore as they released the follow-up Nexus 5 a few months ago. I got a Nexus 5 pretty early on and after using it intensively for the past months, I’d like to share my thoughts on the latest Google Nexus phone.

The Nexus One from HTC was a great smartphone in many regards and one of them was the hardware design. HTC created a unique look with the multi color trackball and aluminum casing, which was a compelling start for the new Nexus line. But then Samsung took over the Nexus Device duties and we got some bland plastic devices for two years while hoping to get Nexus One like build quality again. Now it’s LGs second turn after the LG Nexus 4 in 2012, which was really awesome. The Nexus 5 is a little bit taller than the Nexus 4 but thinner and lighter (only 130g). 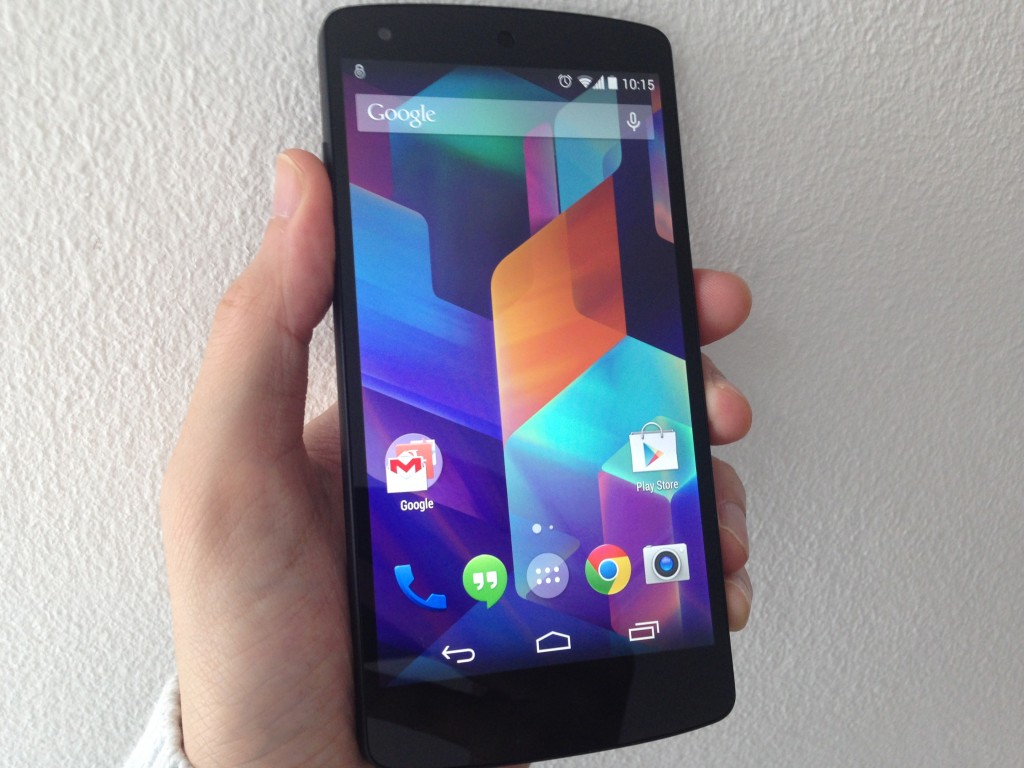 The front is not sporting any hardware buttons as usual for Nexus devices nowadays, and consists mainly of the big 4.95 inch screen, the front cam and loudspeaker. The bezel is pretty small on all sides which helps keeping the device as small as possible, but I still really really hope that we have finally reached the peak of the display size race at least for Nexus devices and regular smartphones. While it’s a good thing that the Nexus 5 is very light, I wouldn’t want it to be much lighter because at some point it has a negative impact on the perceived build quality.

Sadly the display edges are not curved like on the Nexus 4. That is really a step back in my opinion because it felt great to swipe over the screen edges with the nice curve, much nicer than on the hard edges of the Nexus 5. This can be said about the whole hardware design of the Nexus 5. While the Nexus 4 was more rounded and felt comfortable to hold in the hand, the Nexus 5 is edgier and even though it’s thinner it doesn’t feel as good. So generally the handling was better with the Nexus 4 due to the hardware design decisions, and the use of more rounded edges. 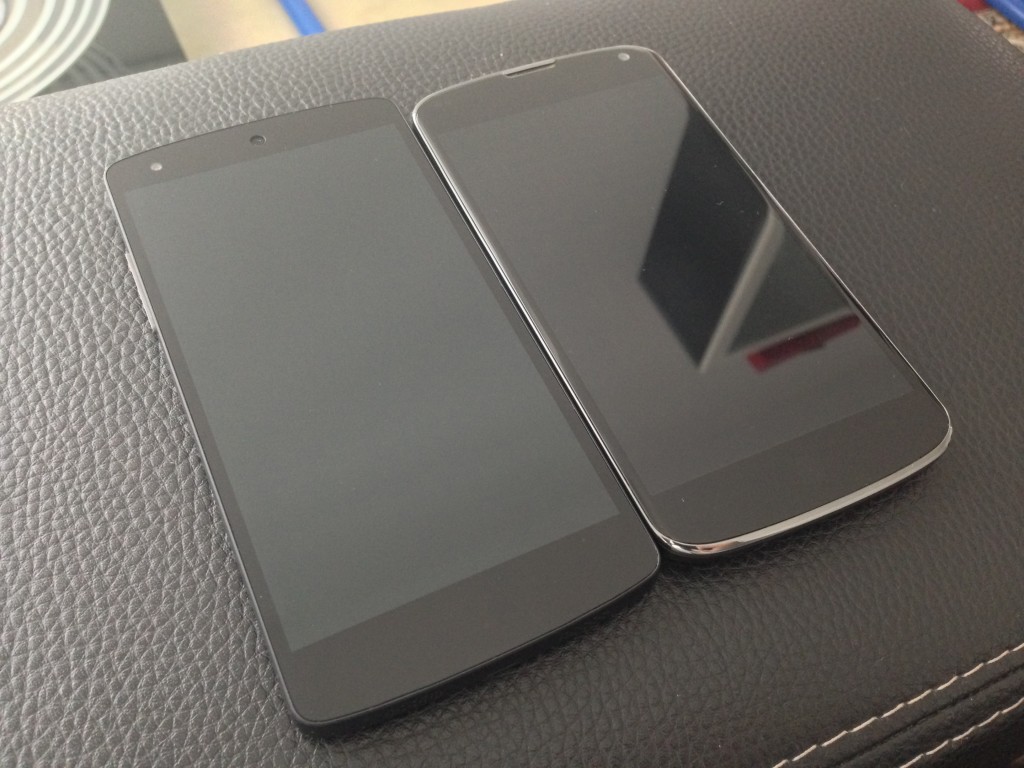 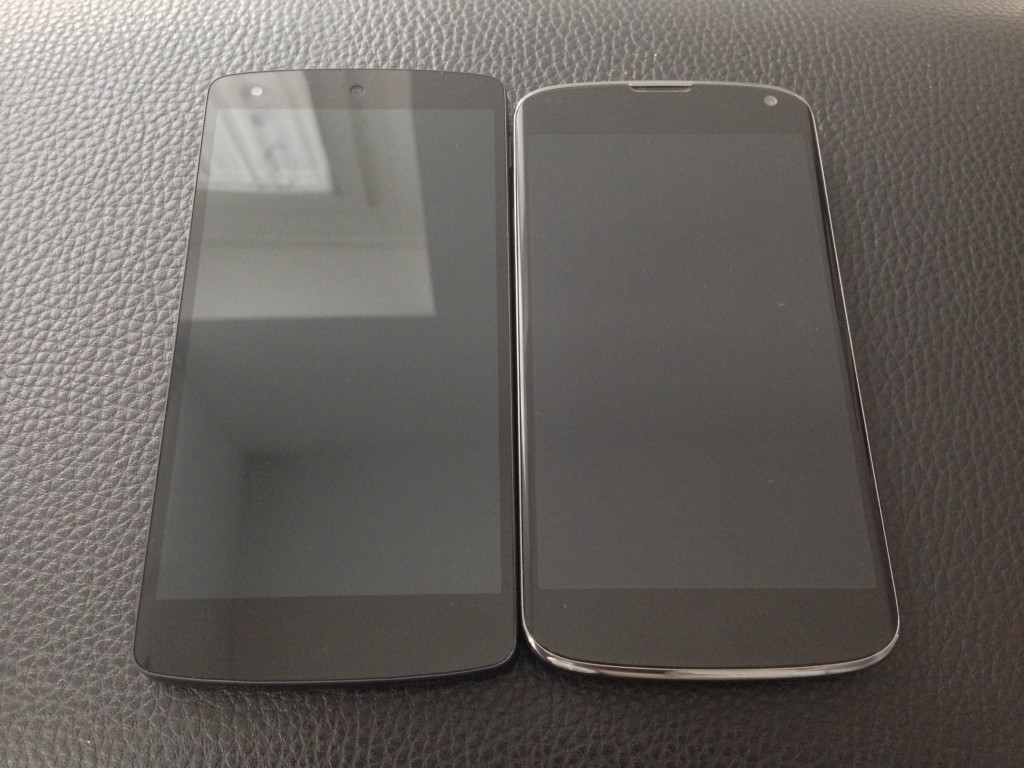 LG got rid of the glass back and replaced it with a soft rubber back, which I surely prefer. I love my Nexus 4 too, but I hated putting it on any hard surface because I was fearing that it might be easily scratched. This is not the case with the Nexus 5, thanks to the new back which by the way has the Nexus label written on it in landscape orientation. Interestingly this doesn’t mean that the default launcher is supporting landscape mode. 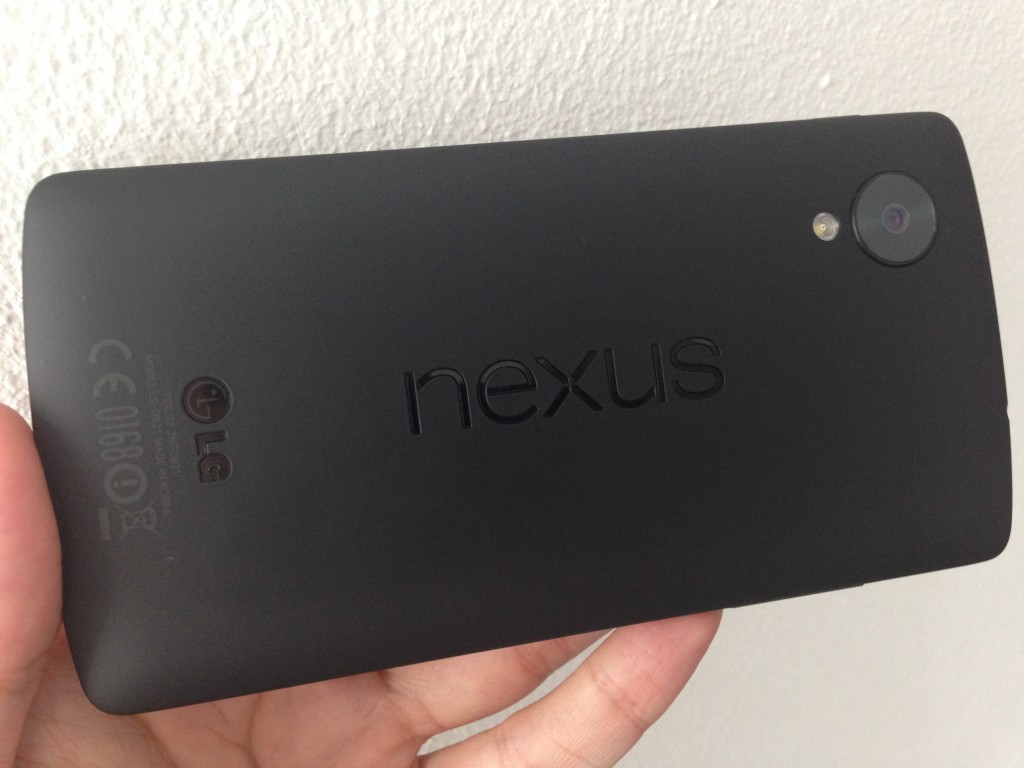 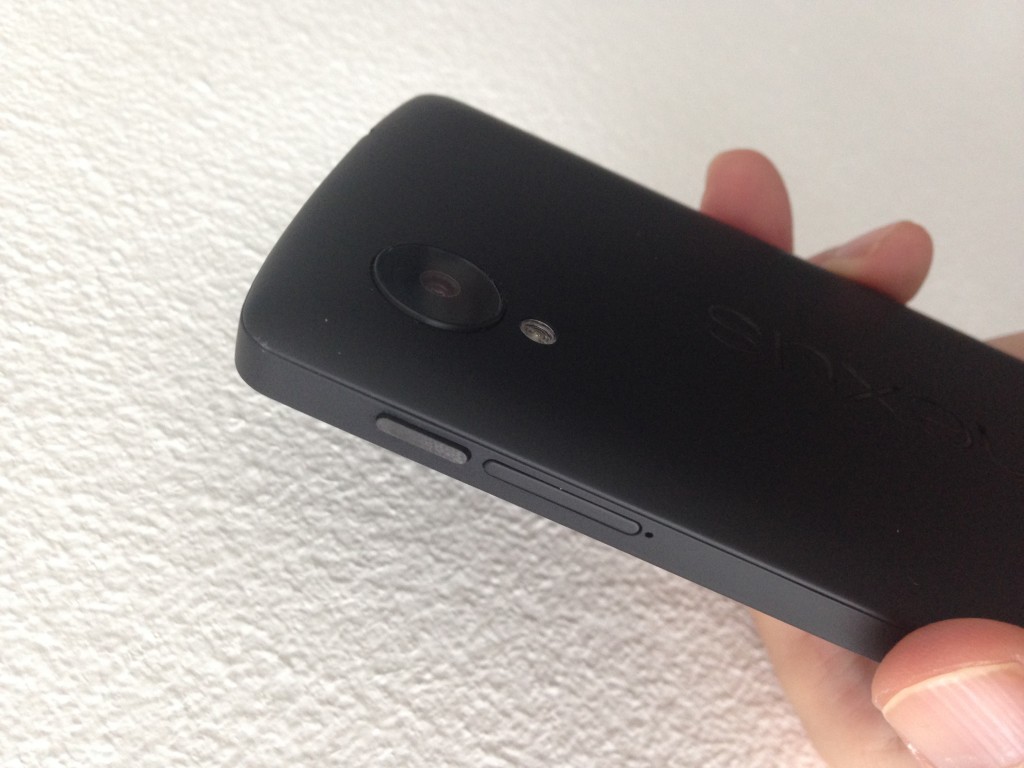 Even before you’ll realize the new Nexus logo orientation you will definetly see the huge camera lens on the back. It has been positioned at the top-left corner and leaves the impression that Google focused on good camera hardware this time, even if it means that the device won’t look as pretty anymore. But contrary to that impression the pictures made with the Nexus 5 are average and even after the latest update to Android 4.4.2 the performance by far doesn’t rival the better options out there like the iPhone 5S. 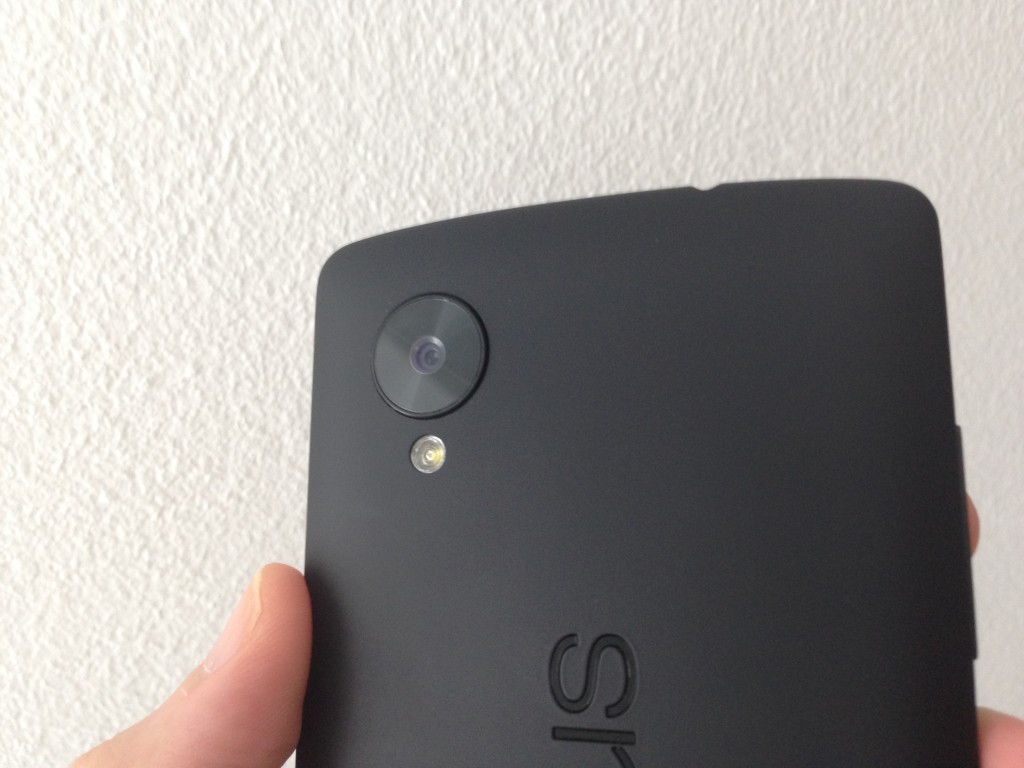 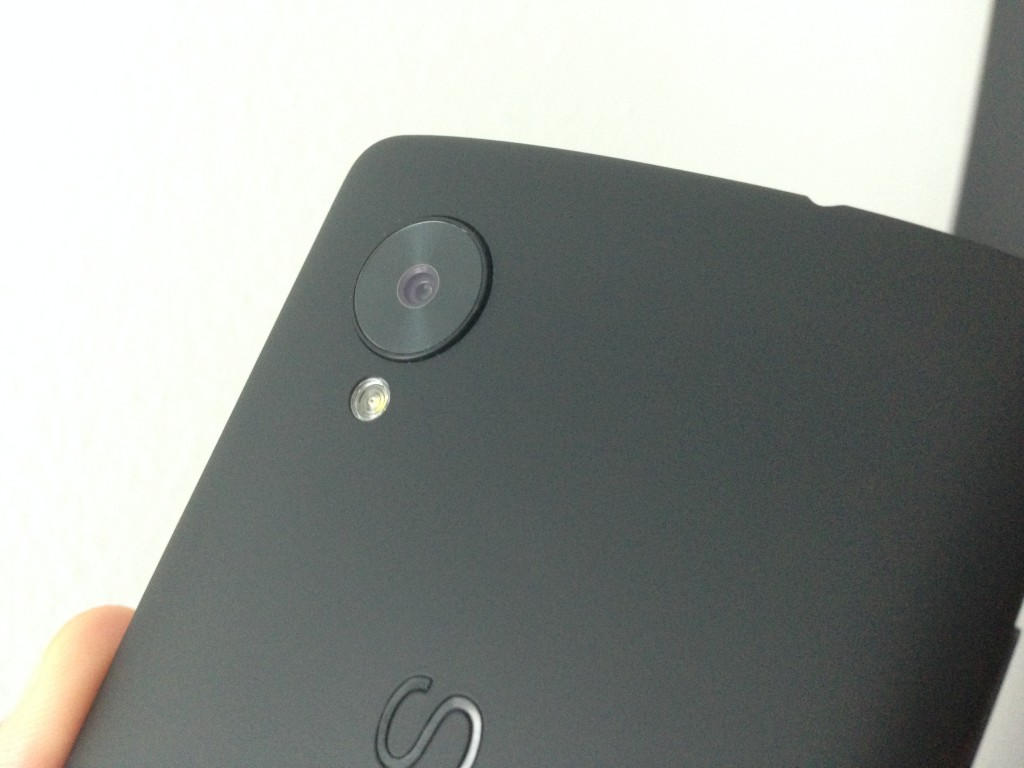 Two loudspeakers and the micro USB plug are at the bottom, while the headphone jack is still at the top (to my dismay). The volume rocker is on the left, and the power button shares the right side of the device with the micro sim tray. Even the ceramic buttons have hard edges now, which fits to the rest of the hardware, but doesn’t make it more comfortable for your hands. I’m not a fan of the buttons because they are very wobbly and even tough the pressure point feels ok, I hate the sound the buttons make when you softly shake the phone. This problem seems to affect only some devices, while others are perfectly fine. So you might not have the buttons issue if you are lucky.

Even though the glass construction and the glittery back of the Nexus 4 weren’t for everybody, the Nexus 5 looks pretty tame in comparison if not to say boring. The rubber back is not as grippy as you might expect, but this is still a big step forward compared to the extremely slippery Nexus 4.

With the Nexus 4 I constantly wanted to hold in in my Hand just to feel the nice display and the rounded edges even without really needing to use it. But the Nexus 5 isn’t that inviting, it’s not like I want to play with the device just for the fun of holding it. You can get about one day of battery life with pretty frequent usage, which is what most phones nowadays manage to provide.

Having a high resolution screen with good contrast and color reproduction is absolutely essential these days. You are going to to a lot of stuff on your smartphone and spend a lot of time looking at that screen, so it better shouldn’t tire your eyes quickly. The question is how much pixel you really need on a 4 – 5 inch smartphone screen. The Nexus 4 came with a 720p resolution spread across a 4.7 inch screen (320ppi) and even though I’m very picky when it comes to resolution i was perfectly happy back then. Now with the Nexus 5 we get a 1080p Full HD-IPS display on a 4.95 inch screen which amounts to 445ppi (pixel per inch), and i can’t imagine ever needing more than that pixel density on a smartphone or tablet display. I just don’t think anybody would really notice a difference, and I’m not taking this lightly. A few years back a lot of people thought that they will never need more than HVGA (mostly iPhone users before Steve Jobs finally explained the benefits of a high resolution ‘retina’ screen), but i could see the pixels on-screen and was looking forward to the next generation displays with HD resolution. Now we have reached a point where everybody should be happy and there are other issues which should get more attention by the manufacturers like low energy consumption and readability in bright conditions. 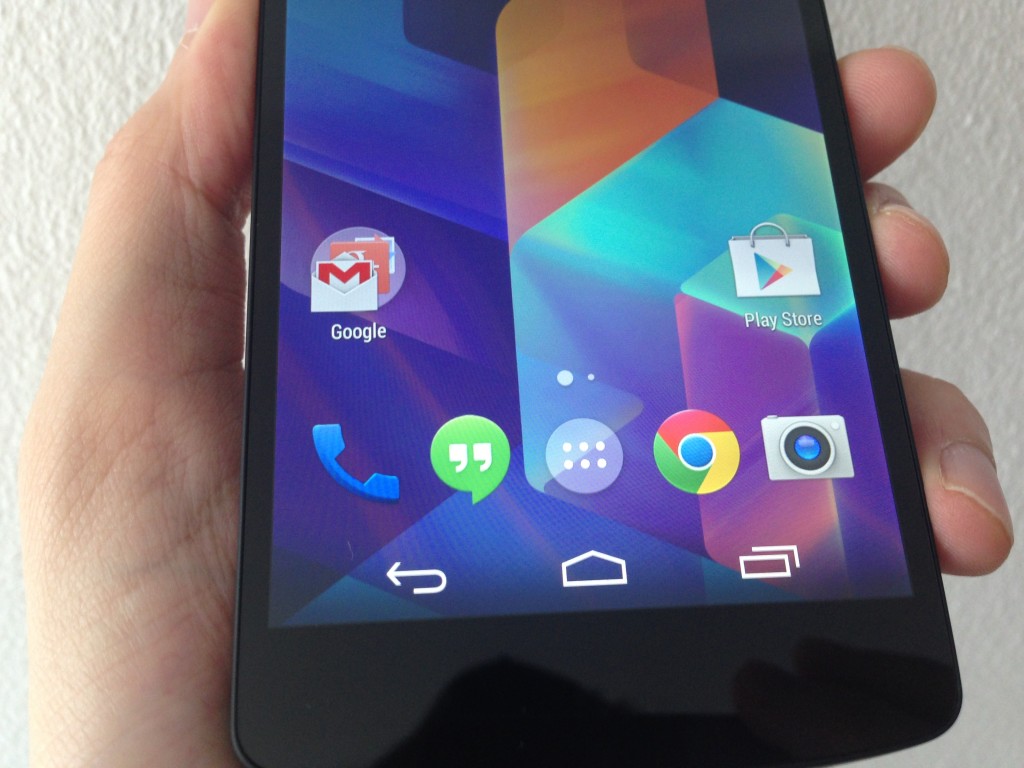 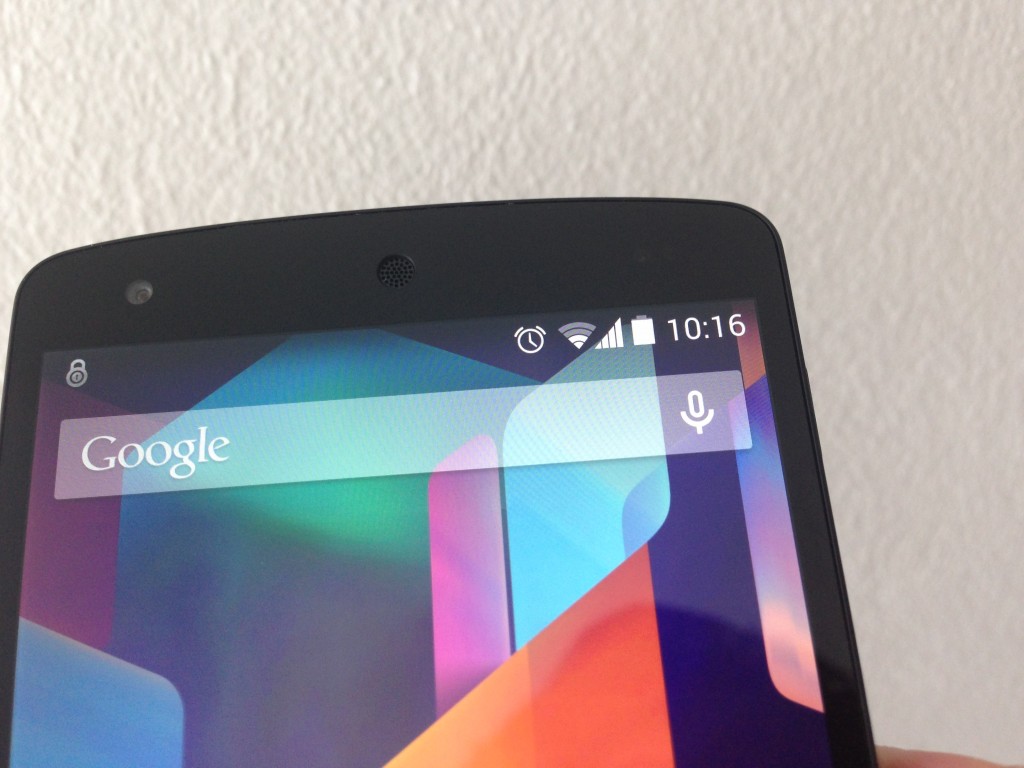 And LG did deliver again, as the color reproduction is great and finally the brightness setting is not as aggressive anymore. On the Nexus 4 the screen would become very dim as soon as you weren’t in direct sunlight. And at the same time the automatic brightness would change the display setting way too quickly, even if you where just walking through a shadow for a few seconds. Those two points are a pretty bad combination. Luckily this isn’t the case with the Nexus 5 anymore, but occasionally the brightness is a little bit too high now. 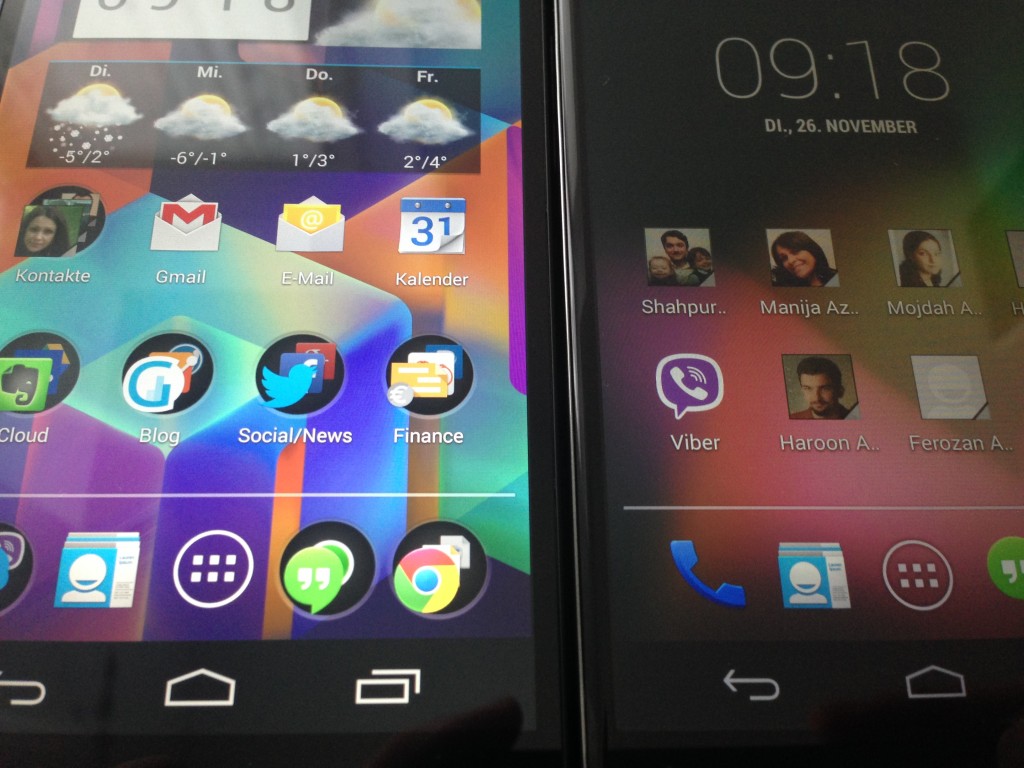 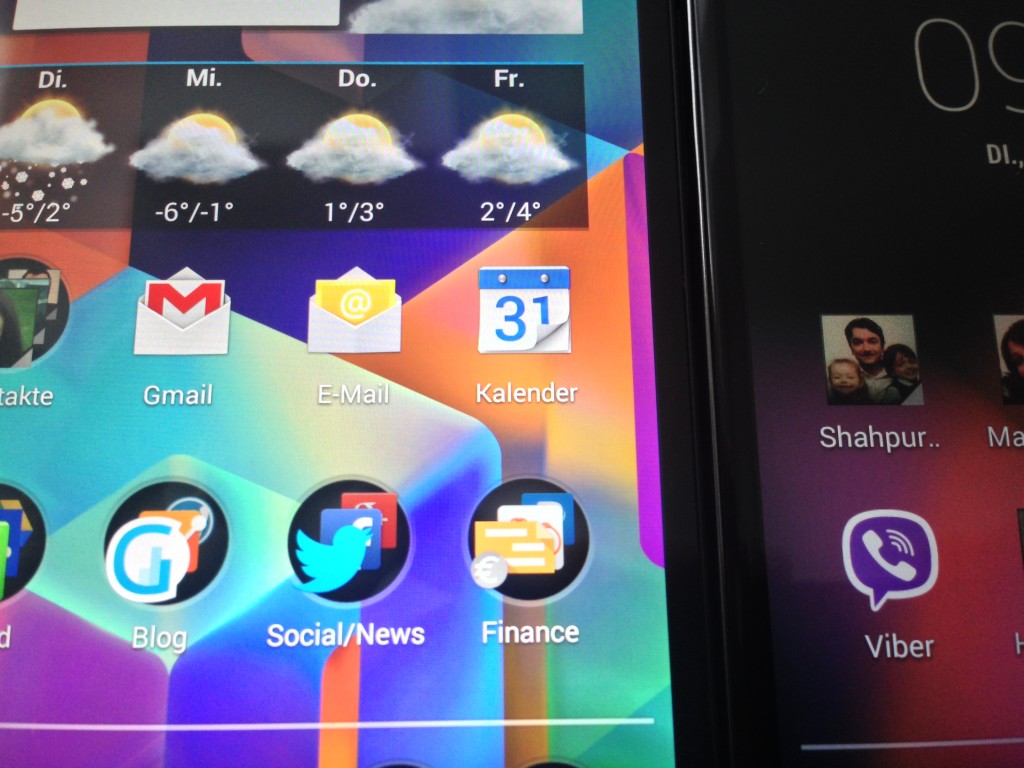 Viewing angles aren’t as impressive as other devices like the HTC One or iPhone 5S. You can clearly see the colors fading when looking at the screen from different angles. But overall LG still did a very good job with the Full HD display even without considering the price tag.

One of the big letdowns of the past Google Nexus devices was camera performance. While Apple can rightfully claim that the iPhone camera is actually the most popular camera on earth, Google was never putting much effort into this area. But they acknowledged the importance of the camera feature on a smartphone some time ago and vowed to focus on this feature on future Android updates. The Nexus 5 comes with a new floating lens technology that is supposed to take better images especially by stabilizing the picture to prevent blurry movement shots. Honestly it’s still too difficult getting a clean picture without blur, so the lens seems to be more marketing than true performance if you ask me.

The picture results can range from very good to average depending on the lighting conditions, and the time you take to get a clear shot. Especially in dark conditions the results are not good, and still can’t keep up with the better smartphone cameras out there. Even after a recent software update for the Nexus 5 the shutter time is still not snappy.

The Nexus 4 was blazing fast with Android 4.3 and still is one of the fastest phones out there. This is also true for the Nexus 5 which comes with Android 4.4 KitKat, so the difference is really not that visible on regular usage. You will notice the spec bump of the Nexus 5 mainly on graphically intense games. Having said that it’s really a joy using the Nexus 5, running different apps at the same time, switching between them and browsing the internet. All without any delay or stutter. Android 4.4 KitKat is another iteration on the strong Android 4.0 Ice Cream Sandwich fundament with some tweaks regarding the color scheme (the Tron blue is mostly gone – and i’m very sad about this) and a few great new features like the dialer which will suggest near by locations when you start typing a number.

But the biggest change is the new Google launcher which emphasizes Google Now. Swiping to the left will show you Google Now along with the search feature, so this means all your own homescreen pages are on the right side. I don’t like this approach that much because it means that Google basically reserved a whole homescreen page for Google Now and you can’t change that other than by installing another launcher app. I will write a separate article about Android 4.4 KitKat soon, after finishing some more hardware reviews that i have in the pipeline.

With each iteration of the Nexus line it seems like Google is getting more and more public attention with their own devices. While the first few Nexus smartphones where primarily meant for showcasing the potential of Android and to be used by developers and smartphone geeks you can see that a competitive price tag combined with great hardware can be successful even without putting billions of dollars into marketing like Samsung. The Nexus 7 (2012) was a huge success and it seems like the Nexus 7 (2013) will follow suit. Even though the Nexus 4 didn’t have the same big impact as the Nexus 7 tablets it was a success, and i’m convinced that the Nexus 5 will sell even better. In direct comparison to the Nexus 4 i’m missing the attention to detail when it comes to hardware design and handling though, as the round body and tight buttons of the Nexus 4 were more pleasant to work with. But taking overall quality into consideration there is simply no other smartphone out there which will give you this kind of specs, build quality, Full HD screen and first class Google support with this price tag.

Samsung Galaxy Tab 10.1 will get TouchWiz UI update in August – Tears of Joy and Sorrow have been witnessed