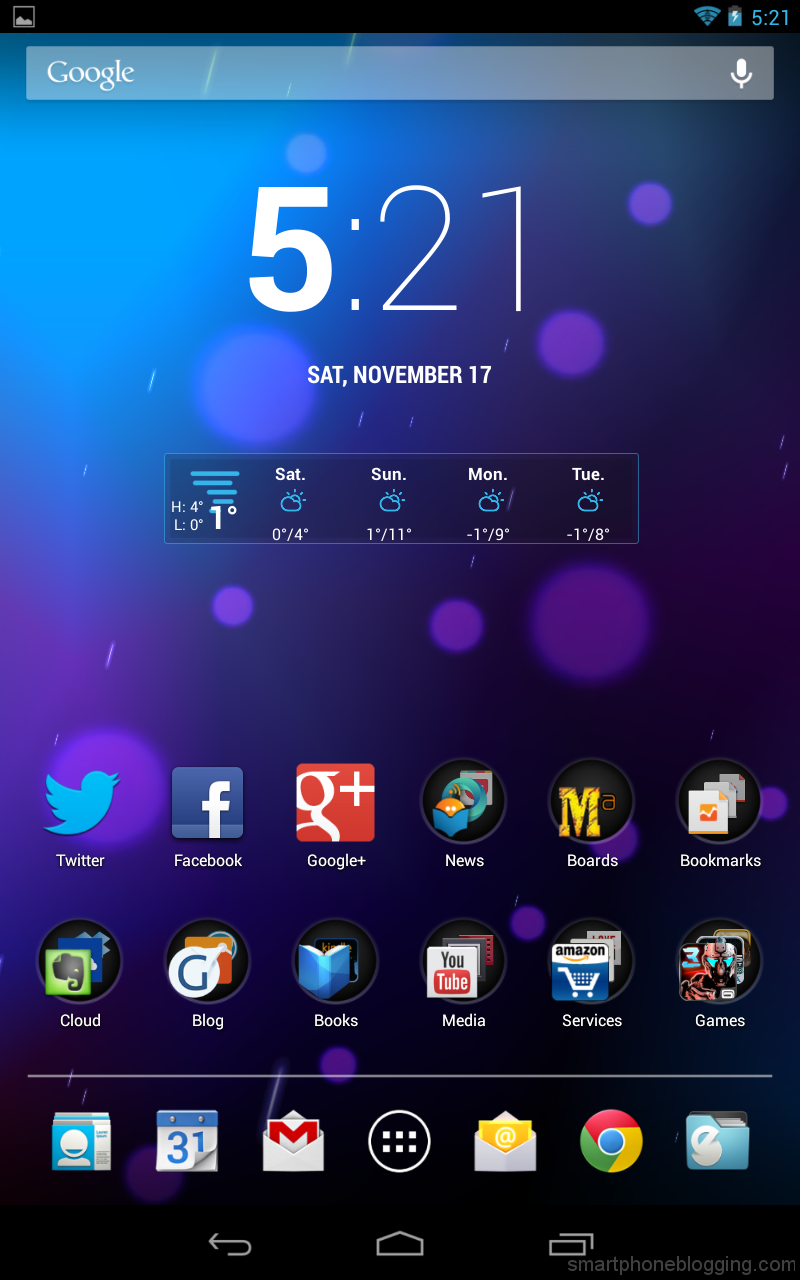 Google is continuing its rapid update philosophy with Android 4.2.1, which was released alongside the Nexus 4 and Nexus 10 recently. This is not a big update by any means but there are still some very interesting new features. And one major setback.

The homescreen hasn’t changed much, besides the annoying fact that all of the dock app icons have been made smaller than before. I don’t know why Google did this, as the icons where perfectly fine on Android 4.1. They look too small to me now, but i guess you’ll get used to it quickly.

Android 4.2.1 Jelly Bean has a few tablet only features, the biggest addition being multi-user support. Tablets are usually shared among family members in a household, very similar to laptops or desktop PCs, so it’s great to see Google supporting this use case. Finally you can create separate profiles for your kids so you can let them play around with your tablet without the fear that they might delete your work mails or do other unintentional damage. Or setup a user which is really suited to the use cases of your partner, instead of sharing one home screen setup.

Adding a new user is easily done in the settings, where you can also add owner data. All users can install and use apps independently, but you can’t share apps. If you have bought an app for your user, there is no way to share it with other users of the tablet. You have to buy the app twice. Users also can’t have two different app versions installed on a device at the same time, so whenever one user accepts an update it will be effective for all users that have installed the app. Furthermore the initial Google user you set up your device with is called ‘owner’, which basically means administrator in desktop pc language. The owner can delete and uninstall any app or user at any time.

There are two ways to switch the user. You can either select the user you want to login with on the lock screen, or via notification area where there is a new tab available providing shortcuts to WiFi, Bluetooth and more. Sadly I encountered some nasty bugs while playing around with the multi-user feature. One of them occurred while I was in the playstore and tried to install some apps for my second user. The taps on the install button would highlight the button but didn’t actually start the download. And I had strange freezes every now and then which never happened on the last Android Version. Changing the orientation of the home screen took more than 15 seconds. These are just a few examples. Google definitely needs to make some bugfixing here.

You’ll be able to access two tabs from the notification layer now. Swiping down from the top-left half of the display will provide the known notification shade. Swiping down on the top-right will show the new tab with shortcuts to often used features. While the idea is nice the execution is flawed. The problem is that I don’t want shortcuts which will open the settings page i.e. for WiFi, but real toggles so I can easily turn on/off WiFi via notification tab. As it stands now I will continue to use the android power widget to toggle settings quickly, until Google fixes the new notification tab.

The keyboard has been updated to support swipe input. It’s an interesting feature meant to simplify one-handed text input, but I rarely use it. Especially on tablets it doesn’t make much sense to me, as it seems to be faster to write text with traditional key picking. But the biggest issue is the fact that the swipe keyboard won’t work in all apps. I don’t know why but when using some of my apps i.e. for banking, the keyboard stopped recognizing swipe gestures until I switched to another app.

One of the features I looked forward to the most were lockscreen widgets. There have been so many instances where I just wanted to quickly glance at my upcoming appointments, but had to unlock the device in order to see whats next. While there always have been some 3rd party apps like widget lockscreen, with Android 4.2.1 this is supported out of the box.

At the moment there aren’t that many apps that utilize this feature though. Initially you have the option to put the clock, calendar, email and messaging widgets on the lockscreen. This will surely change soon as most of the popular apps like ‘beautiful widgets’ have already begun releasing updates to support lock screen widgets.

Generally I really like how Google implemented the new lock screen. You can put multiple widgets on your lock screen but not on one single page. Instead you have to swipe between pages, with each of them representing one lock screen widget. That’s a great concept as it keeps the lock screen uncluttered, and at the same time provides enough space for each widget to show a lot of information.

NFC support has been enhanced too, as you can now share your photos, videos, contacts, web pages, YouTube videos, directions and apps. Other new features include a mode called daydream which will show random images from your device when its in a docking station, and screen sharing capabilities via wireless display adapter to duplicate the tablet screen on a HD TV.

What happened to project butter?

Some of you might remember how much was written and talked about Project Butter when Google introduced the Nexus 7 alongside Android Jelly Bean. Google was proud to have focussed on user experience, 60FPS animations and lag free navigation on the homescreen and when opening or closing apps. And it was really impressive. The Nexus 7 was the first device which could really rival the UI performance of current iOS devices. I’m very surprised to see that Google seems to have forgotten about project butter with Android 4.2.1. At least on the Nexus 7. This seemingly minor update has a severe impact on the Nexus 7 performance. It’s lagging every now and then, opening Google Search takes ages before you can start writing. And overall it just feels like a step backwards performance wise, especially when you run it on Googles own latest hardware expecting the best of Android. There are some theories out there regarding the lags, one of them is about the Nexus 7 not recognizing free memory correctly. Multi-user seems to be another source for performance issues. But I don’t really care that much about the actual reason, if Google wants to compete with the user experience of their main rival from Cupertino, they should take their own efforts in the veins of Project Butter more seriously instead of making them look like one-time features of specific Android versions.

Wrapping it up there are some nice additions in Android 4.2.1 like lock screen widgets and the new notification shade settings. Multi-user support is especially interesting for families. Many people have been waiting for such a feature to share their tablets more efficiently. But the update seems to be rushed. Otherwise I can’t explain all the bugs and performance issues I encountered. Honestly I was happier with the Nexus 7 pre 4.2.1 because everything was much faster and more stable. I’m sure that Google will address this issues soon, but I’m a little bit disappointed that Project Butter became collateral damage so quickly after it was introduced with so much emphasis.