After many days full of leaks and rumours Google finally released the long awaited cloud service Google Drive. With Google Drive you will get 5 GB of free cloud storage which can be used to upload all different kinds of files. Besides the Android app you will also be able to use Google Drive on desktop PCs. Upgrading the storage to 25 GB is possible for 2,50 dollar a month. 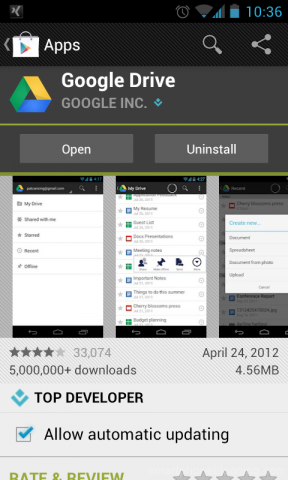 This will put a lot of pressure on Dropbox which is currently one of the most successful cross device/OS cloud services out there. Recently Microsoft also updated their Skydrive app for Windows Phone devices and Apple provides the iCloud service for a long time now. So it will be increasingly harder for small companies like Dropbox to compete with the big players.

At this point Google Drive as well as Skydrive are far behind the usability of Dropbox though. The fight for the cloud just has begun.

HTC Nexus One vs. Samsung Nexus S: Which manufacturer should deliver the next Google phone?