Review: Android 2.3.3 (Gingerbread) for Nexus One

What an coincidence. Just a few days ago i wrote an article about Android fragmentation and how many Nexus One customers were unhappy with the way Google handled the Gingerbread rollout. It was more than one month ago when Google said the update is coming within the “next weeks”, and after that they went silent. Some people even thought that Google won’t rollout any more updates for the Nexus One, as the Nexus S became the new flagship device. I was convinced that we will see the update, but at the same time i couldn’t understand why there was not any further information from Google after the initial tweet last year. Google officially announced that the Android 2.3.3 update is rolling out for Nexus S and Nexus One devices on the 22th of february. It seems that the reason for the postponed gingerbread OTA for the Nexus One was that the Nexus S sporting Android 2.3 was suffering from some nasty bugs, which apparently got fixed by the following minor updates. Therefore Nexus One user were directly upgraded to Android 2.3.3 instead of 2.3. This makes a lot of sense and it was a good decision, but Google should be more communicative regarding such decisions in order to keep the customers informed and thus satisfied.

As soon as the update file was available on the XDA developers message boards i flashed it on my Nexus One, since i didn’t want to wait until the OTA hits my device. So let’s go through the most important new features and see whether Gingerbread was worth the wait.

Besides the new green color for the browser and dialer icons, there isn’t that much to be seen on the homescreen. You still have the same layout as on Android 2.2 (FroYo), with three shortcuts at the bottom and the dots at the corners representing the number of homescreen pages which can be accessed through swiping in that direction. 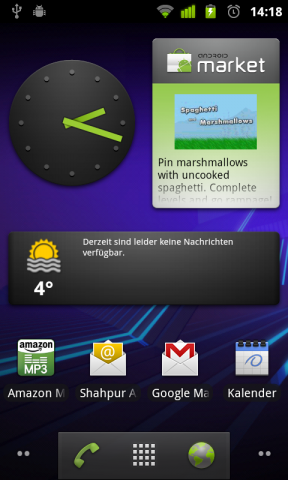 The homescreen is still not fluid enough and can’t compete with the likes of LauncherPro. And there is no landscape support for devices without slideout QWERTY keyboards, i don’t understand why Google doesn’t want to add this feature which many 3rd party lauchers already have. It makes no sense to browse in landscape, and be thrown back to potrait view the very moment you leave the browser.

The notification drawer has been revamped visually. Android 2.3. comes with a black notification drawer, and new notification icons for the apps. Icons are smaller now, and either grey or green. Actually i’m not happy with this change at all, because the icons on Android 2.2 were black on white background and they were bigger. It was much easier to identify which icon is currently shown on the notification drawer at a glance. With Gingerbread you have i.e. a tiny grey Gmail icon on black background. I can’t believe how Google can seriously claim that this leads to better contrast and readability, because it’s definetly worse than before. 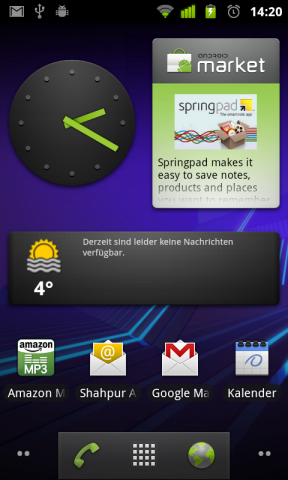 Pulling down the shader reveals light and dark grey colors, which don’t look nice in combination. The simple white on the previous Android version was much more elegant and stylish. All changes to the notification drawer are purely visual, there is no new functionality. 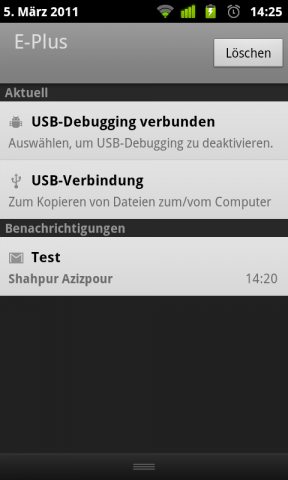 Finally it’s possible to directly access all downloaded files via browser or by opening the new downloads app. This was really overdue, since you had to open a file explorer in the past to find recently downloaded files again. Having a downloads view is a much more convenient way to access those files. 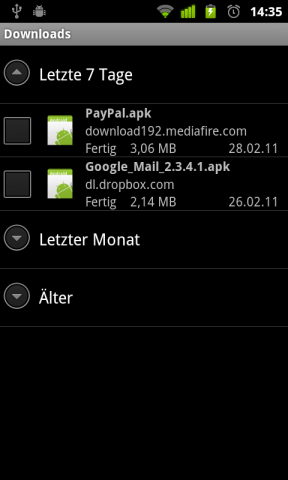 The contacts app uses a new design for the contact photo boxes, it’s really nothing interesting but neithertheless Google decided that they need to change the boxes slightly. Since Android 2.3.3 introduces SIP calling, you can now directly call an contact via internet connection. In order to do this you have to install one of the Android Market apps like Skype, which have an SIP calling feature. 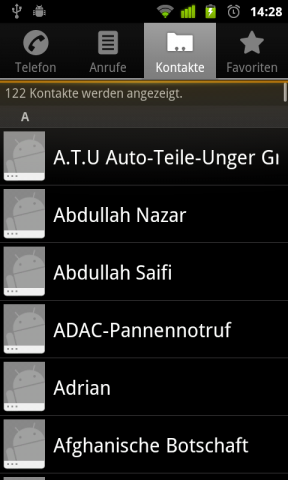 Androids onscreen keyboard always was a weakspot, and even though Gingerbread made some enhancements it’s still not among the best out there. Most importantly the keyboard does support real multitouch input now, but i have to admit that this doesn’t seem to work flawless on the Nexus One display which has problems recognizing multi touch inputs. Generally the spaces between the letters are bigger now, but at the same time the height of the keyboard is smaller than before. 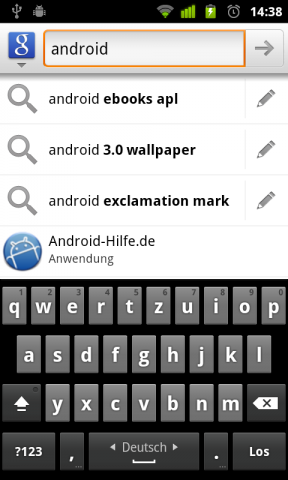 Overall the experience is still average, and i prefer i.e. the HTC Sense keyboard visually and from an usability viewpoint. You should check out the HTC IME mod on XDA devs, which is a keyboard hack providing an incredible amount of options and a great usability.

Apple’s iPhone had great UI consistency from the start, whereas Android was quite confusing at times. Copy&Paste is one of the prime examples. This feature had to be accessed differently in every Google app. So if you wanted to copy a text from your Gmail account, you had to use a different approach than within the browser. And while you could copy text from Gmail emails, there wasn’t any possibility to do this within the regular email app. In any case selecting text was really a chore, as it was too inaccurate selecting anything with touch input. The only other way was using i.e. the trackball of the Nexus One which could move a mouse pointer to the desired area. Both approaches are really dated and unintuitive. 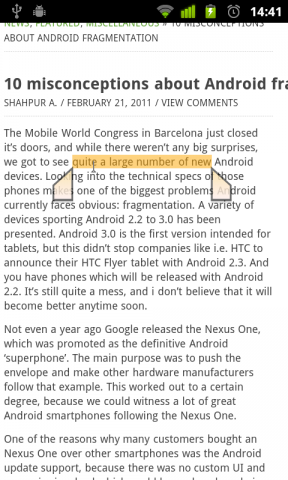 With Android Gingerbread this is finally fixed. By pressing and holding on any text within the browser, email app, Gmail app and any input field, you can easily select text using two pinpoints. Another tap on the marked text will copy it to the clipboard. I still had a few small issues when selecting the pinpoints, but this new copy&paste concept is still way better than it was before. Another nice detail is that you can also correct text much easier now, since a single pinpoint is used to position the cursor correctly. 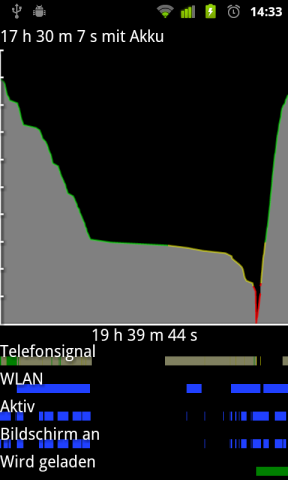 The look&feel of this view is quite old-school though, and i’m sure that Apple would have chosen a much more aesthetic design approach to show the same information. I can imagine that some non-techsavvy people might be intimidated by the technical look of this app management views, since they probably don’t want to think about such issues at all.

Opening the applications menu provides new shortcuts to the battery consumption view and app information list. There is also an additional tab within the applications overview showing currently running processes. By pressing the menu button you can check out all processes which are not active but cached in order to minimize the startup delay next time you open them. 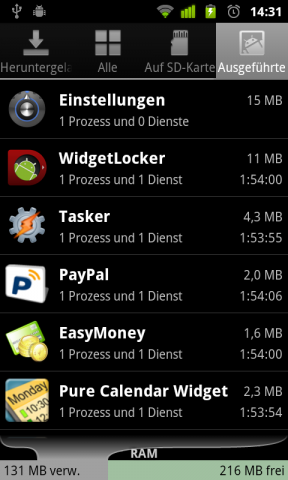 The bottom of each tab also shows how much phone storage, sd card space and RAM is used/free. With FroYo this infomation was also available, but especially the RAM information was shown in a pretty cryptical way which needed some internet research to be understood. 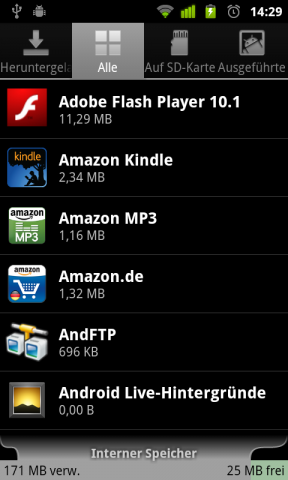 Prior to the first leaked Gingerbread screenshots there were many rumours about a complete UI overhaul, but the final result became something much more discrete. Besides the emphasis on dark colors like i.e. black backgrounds, which is probably a nod to the en-vogue AMOLED screens, there are only small UI changes to be found. 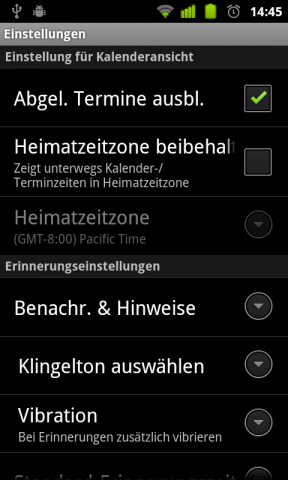 Menus and default UI elements have harder edges now, and there is no use of color gradients. This results in a very clean look. I like this new approach more than i.e. HTC Sense, which utilizes to much of a glossy look. Notification icons have been redone, as i already mentioned in the notification drawer section. But let me say this once again: the icons are TINY now, and it’s MUCH harder to see what kind of icons is being shown at a glace. The Gmail icon in example is not easily distinguishable from the regular emal app icon. The Froyo icons where just so much better in my opinion.

Besides the fact that i prefer black text on white background, due to better outdoor visibility, i also feared the effect that the whole black color emphasis would have on my SLCD Nexus One. But i’m surprised that the battery performance seems to be actually better now. On an average day with a lot of email checking, short telephone conversations, RSS feed reading, listening to music and some internet browsing i get a full day of usage time. This is definetly better than before, where the battery level would be depleted after about 16 hours with medium to frequent usage. 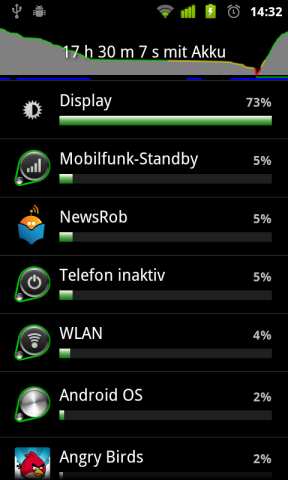 While Gingerbreads OS performance seems to be faster than FroYo, the difference is quite small. It’s not comparable to the leap from Android 2.1 (Eclair) to 2.2 (FroYo) by any means.

After the first screenshots from the Gingerbread update leaked it was clear that we wouldn’t see the rumoured complete UI overhaul, but merely small design changes. So i wasn’t expecting much, and sadly even the slight UI updates weren’t always for the better. Notification icons are too small now, and the decision to use a black notification bar with small grey icons is really bad. On FroYo it was possible to identify the notification icon on a glance but now you have to look twice. I don’t like the UI direction that Google chose with this update regarding icons and notifications.
On the bright side you have better battery performance, more phone storage, more aesthetic menus and new tools like the battery consumption graph. You’ll also notice a little OS speed bump, but nothing dramatic. Android 2.3.3 is not comparable to the major FroYo update, because all the new features and UI changes are small scale. You’ll get some nice enhancements with this, but the really interesting stuff will come with the next major update following Android 3.0 where we will see a unified Android version supporting tablet and smartphone devices. Android 2.3.3 Gingerbread is a nice way to breath a little fresh air into your smartphone in the meantime. 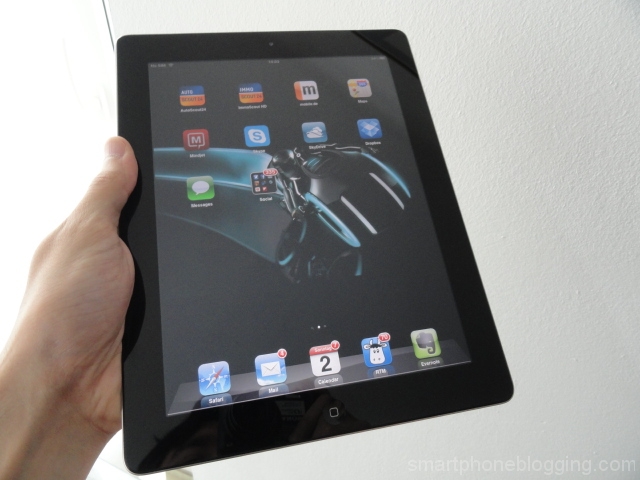 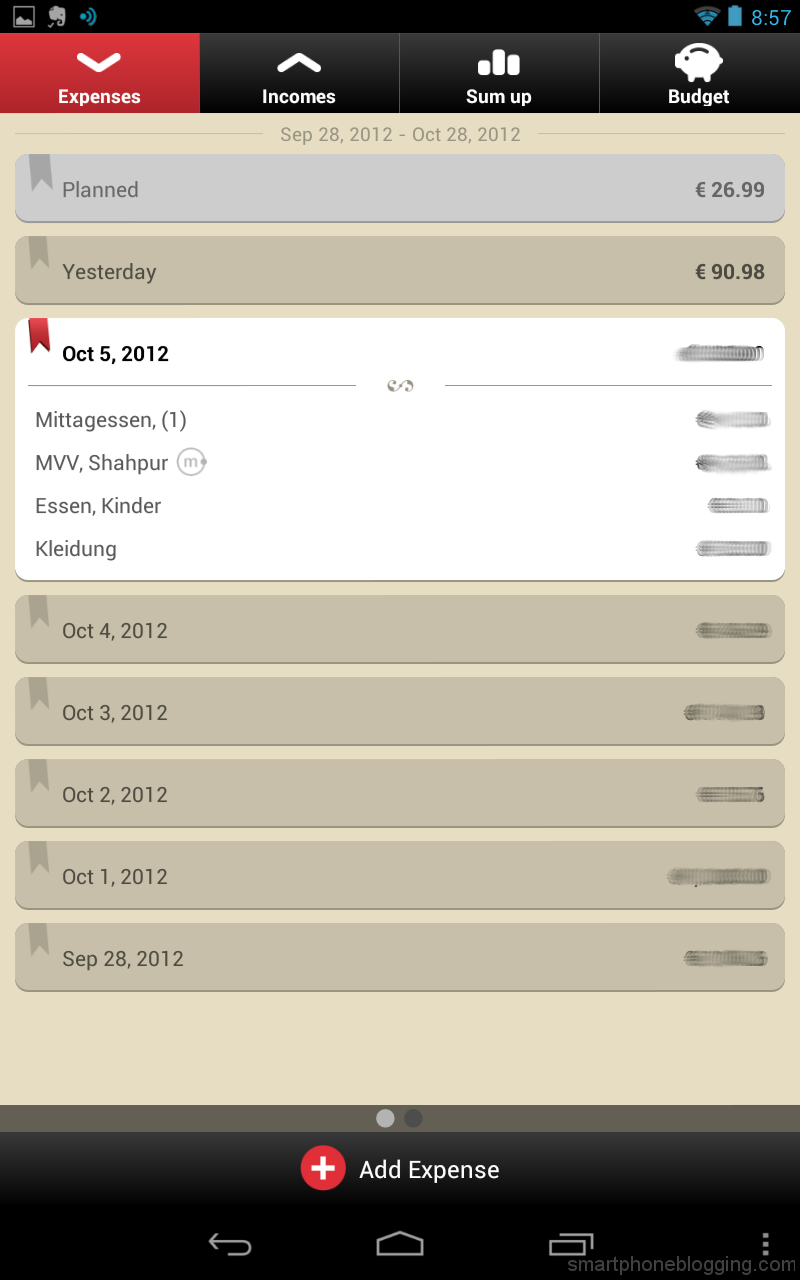