Android is really picking up speed in the last quarter of 2009. We have seen some new Android devices during the whole year, but the Motorola Droid aka Milestone marked the arrival of a new Motorola flagship as well as the first Android 2.0 smartphone on the market. Therefore the public interest was immense: Everybody wanted to see whether Motorola could make a comeback, after many years of stagnation. The glorious days of the Motorola Razr were over a long time ago, and it was time to prove that Motorola has still a chance to compete in the overcrowded mobile market. Fast forward to now, the Motorola Droid was quite a success in the US and o2 recently released this device as Motorola Milestone in germany. Those nice folks also provided me a testdevice, which i have been using for one week now. As always i will start with a hardware review, and then later follow up with an Android 2.0 review next weekend.

The Motorolas Milestone package comes with the regular accessories like an ac adaptor, mini-usb cable, earplugs, a cd with software and a 8GB micro-SD card. The micro-SD card size is bigger than in most other smartphone packages these days, which is a nice move from Motorola. I think that anything smaller than an 8GB Micro-sd card for the flagship smartphones doesn’t make much sense nowadays, since there are so many use-case like navigation or media downloads where a 2GB card would be full in no time. 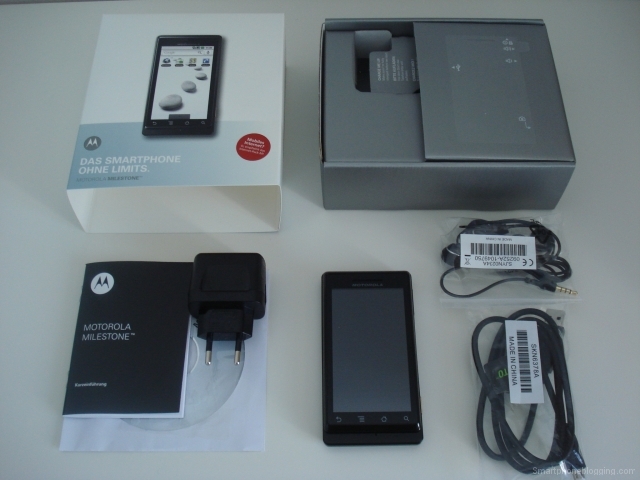 My first impression after taking the Motorola Milestone out of the package was: “It’s as slim as my HTC Hero!”. Motorola managed to produce a smartphone with a full hardware slideout keyboard which is not much thicker than many other keyboard-less smartphones out there. Of course by reading the hardware specs it should be obvious that the device is slim, but after holding it in your hand you’ll truly realize it.

And the next thing you’ll realize is, that the Motorola Milestone is a high-quality device on many levels. First of all the build quality is extremely good, i can’t remember the last time were a manufacturer (besides Apple) managed to be on the same level as HTCs best smartphones built-quality wise. And i have to admit that i was very sceptical despite the high scores on the initial Motorola Droid reviews. But Motorola really managed to put out a great piece of hardware, which can take on the best smartphones on the market in this regard. The device is built with a mixture of metal components, soft-rubber backcover and some plastic. Everything fits very tightly, there are no unsteady elements. I even like that it’s a little bit heavier than other devices, because that adds to the high-quality feel of the device. Overall the Motorola Milestone (Droid) has a very masculine look to it, with the clear edges it seems to be the counter piece of the slightly boring rounded IPhone (and too many other smartphones) formfactor. I really love the design decisions on the Motorola Milestone (Droid) hardware, it’s just a very cool looking device which stands out of the mainstream smartphone crowd.

The front of the Motorola Milestone actually doesn’t have any hardware buttons, but only touch-sensitive icons (with tactile feedback) at the bottom. As you can see on the next picture, the buttons are in the following order: back, menu, home and search. There are no dedictated phone or hangup buttons on the Motorola Milestone. I prefer real hardware buttons though, because that way you can use them for basic things like picking up a phone call with gloves on. The problem with touch sensitive buttons is that they won’t register your input when you wear gloves, so you always have to take off the glove to use the buttons. 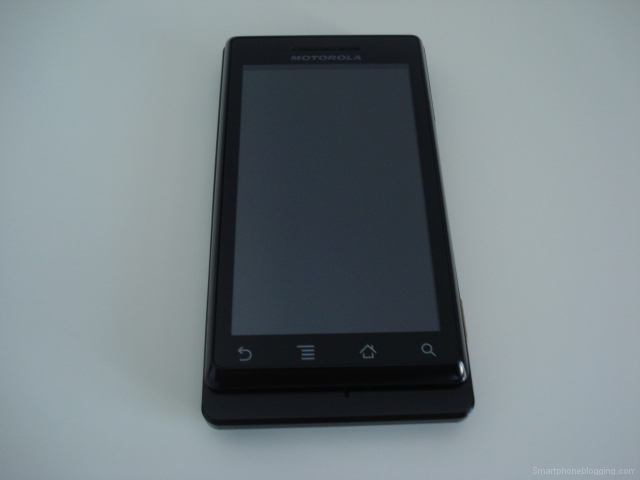 On the left side you will find the golden camera button at the bottom, and the volume control at the top. Both buttons are easily reachable, and work as expected. 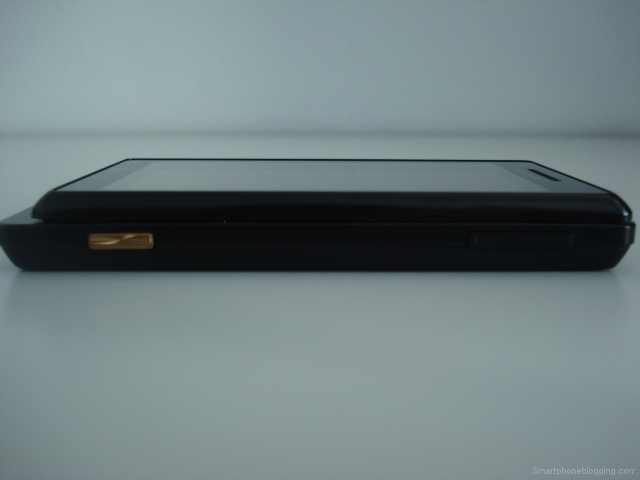 The right side only sports an mini usb slot. 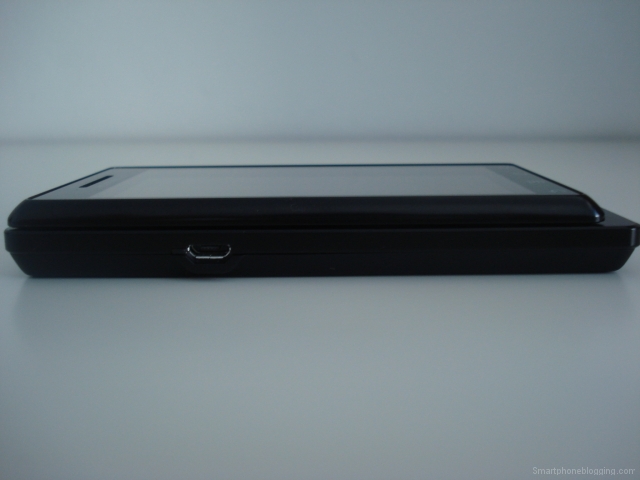 The bottom doesn’t have any buttons or plugs. You can see the edges of the slider beneath the touch sensitive buttons. 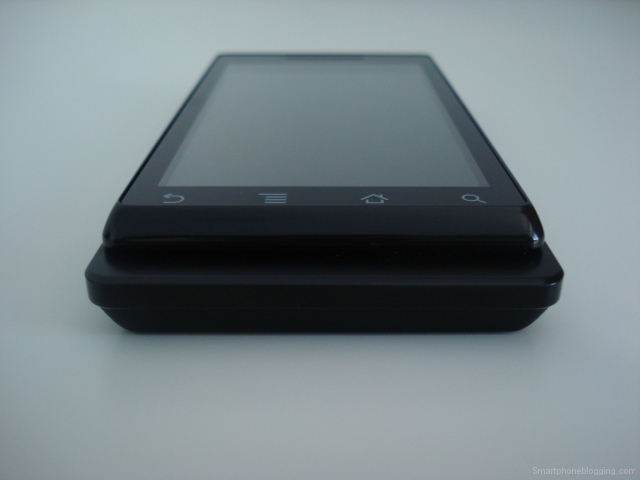 The Motorola Milestone comes with a standard earphone plug, and the power button at the top of the device. 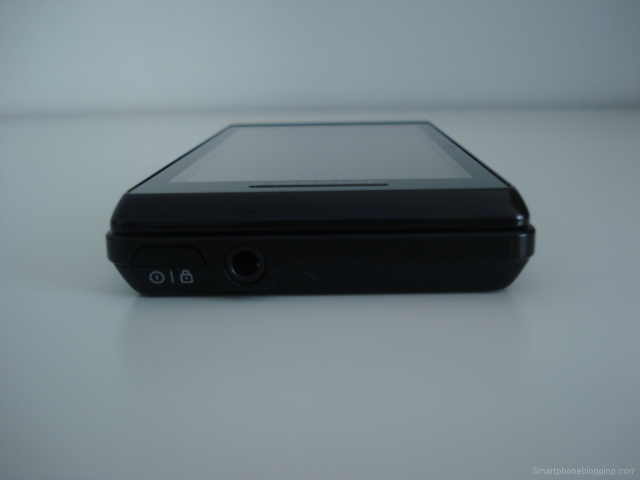 Motorola used a soft touch rubber for the backcover of the device. The backcover can be opened comfortably by sliding the cover down, i like the opening method more than the HTC Hero variant, where i always was afraid to break something since it was quite hard to open the backcover. 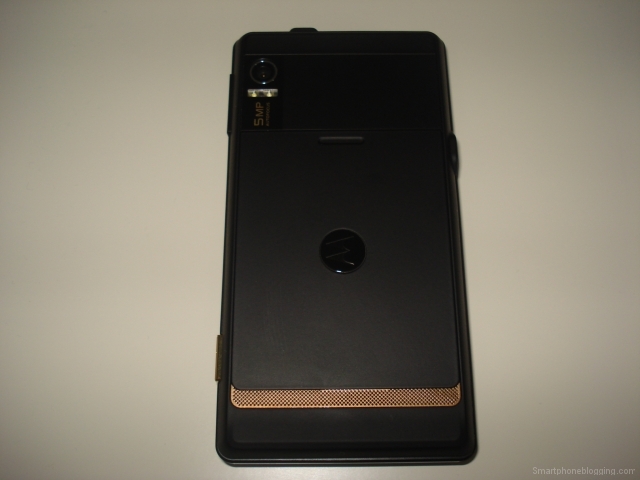 Under the backcover you’ll find the micro-sd card slot and the simcard slot. I don’t like the fact that you even have to take out the battery in order to get your micro-sd card out. This is really not a good solution for people who swap sd cards a lot. 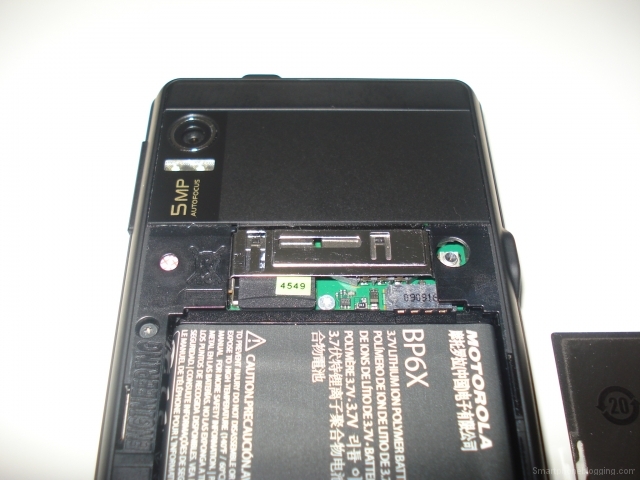 The Motorola Milestone (Droid) display is quite big at 3.7″, extremely clear and very bright. This is of course the result of the 480 x 854 (WVGA) resolution paired with the bigger color palette of 16 million colors (262k colors simultaneous). I always thought that my HTC Hero HVGA (320 x 480 and 64k colors simultaneous) resolution is enough for me, but after using the Motorola Milestone (Droid) for more than one week as my main device, it’s really hard to go back to HVGA with a smaller color palette. Suddenly the HTC Hero display doesn’t look as crystal clear anymore, and i can see edges i couldn’t see before. I guess this will be back to normal after a while, but getting used to the incredibly clear and huge display of the Motorola Milestone within one week proves that higher resolutions do make sense. Touchscreen sensitivity is also working perfectly and is up to par with the IPhone and other devices like the HTC Hero, i had no problems with it up to now. 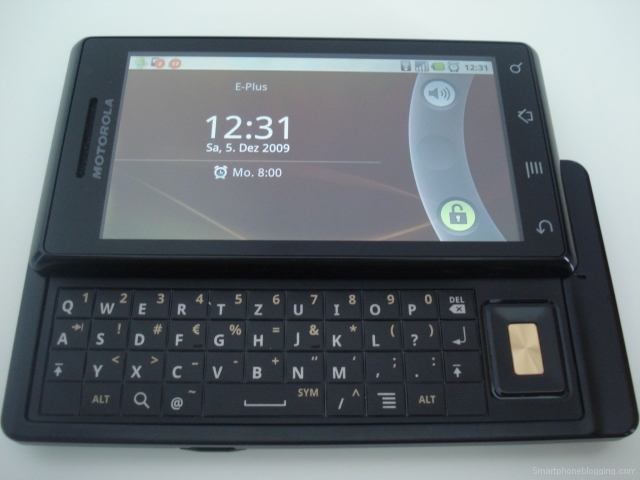 In the past many manufacturers tried their luck with QWERTZ sliders, one of them being Google with the Tmobile G1 which was produced by HTC according to Googles requirements. While the slider mechanism wasn’t all that bad on the Tmobile G1 the device itself was just very ugly. Luckily Motorola did a great job with the Milestone slider mechanism, as well as the general hardware design. 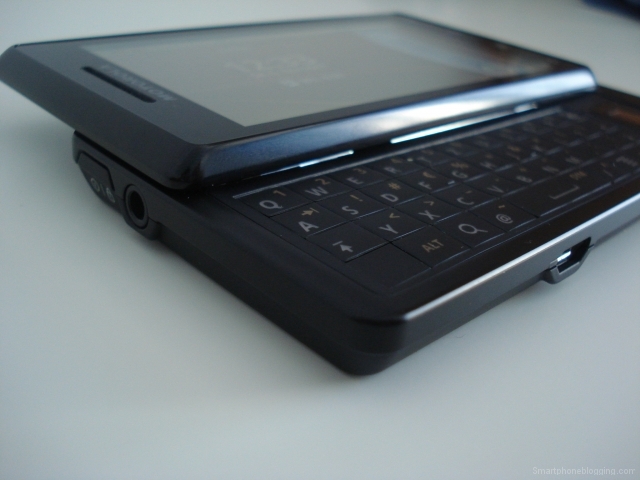 The slider feels very stable and even though you have to use some pressure to make the slider move, it just works very well. 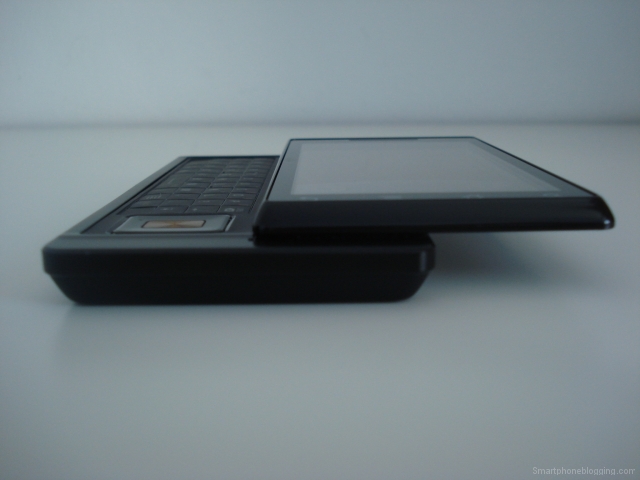 I never was much of a hardware keyboard user, and preferred soft keyboards for a long time, but with the Motorola Milestone (Droid) it’s really comfortable and fun to use. While there may be better keyboards out there on devices like the Blackberry Bold in example, you can still have a good time writing emails with the Motorola Milestone as well. Another nice feature is the 4-way navigation button on the right side of the keyboard with a confirmation button in the center, which works quite well.

Another aspect which i like is the fact that you can hold the device easily in landscape mode, when the slider keyboard is out. You can just hold the keyboard part of the device, and your hand doesn’t obstruct your touchscreen view like on touchscreen-only devices.

I already mentioned the HTC Hero, which is the current HTC Android flagship, a few times during this review. Let’s take a look at some comparison shots of the HTC Hero vs. Motorola Milestone (Droid). It’s hard to capture the difference between the two screens on pictures, but if you take a closer look at the following comparison picture of the Motorola Milestone (Droid) display versus the HTC Hero display you’ll see that the Milestone display is a lot sharper and clearer. This is especially noticable on text and the new Android 2.0 app icons like the gmail icon. Also don’t be confused by the HTC icons for the other apps like contacts, i installed a openHome theme called HTC Hero on the Motorola Milestone which replaces the standard icons by the HTC Sense icons. 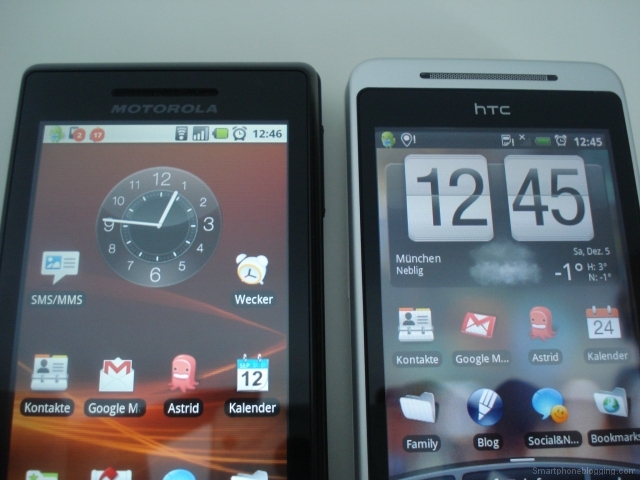 Motorola managed to produce a very slim device despite the fact that is sport a full QWERTZ slider keyboard. It’s only slightly thicker than the HTC Hero. 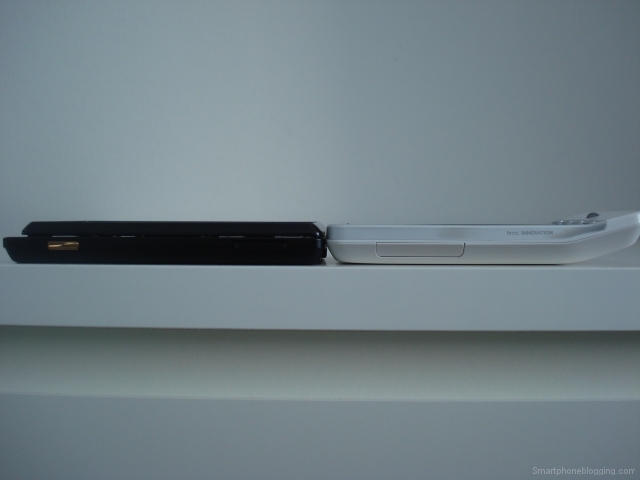 The next picture shows a lockscreen comparison. 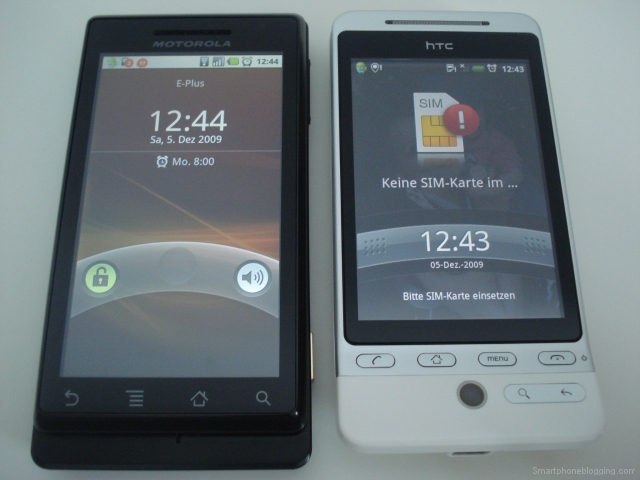 And finally another comparison with both devices showing my blog. 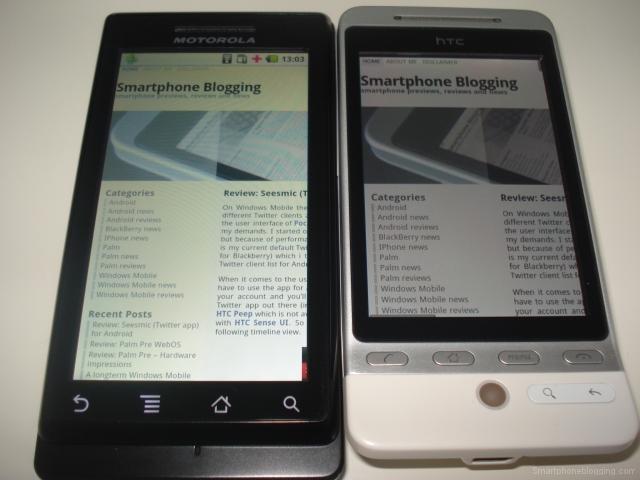 Motorola really hit a homerun with the Motorola Milestone (Droid). The built quality is up to par with the best out there, and Motorola managed to fit great specs into that device too. Starting from the high quality materials for the casing, to the full Qwertz slider keyboard despite the thin frame of the device, a great capacitive 3.7″ display with WVGA resolution, a fast TI OMAP3430 550Mhz CPU, 256MB RAM, all kind of sensors we come to expect (ambient light, accelerometer, proximity, magnetometer), GPS, WiFi, 5MP cam with two LEDs, 3,5mm plug and Android 2.0 you have very complete setup. The Motorola Milestone is just a fun and effective smartphone to work with. I think Motorola deserves the success they currently have in the U.S. with the Motorola Droid, and i can see the Motorola Milestone getting it’s own share of the european smartphone market. Of course there are some nitpicks too, in example the unhandy way to swap micro-sd cards, or the fact that the touch sensitive buttons are not always as functional as real hardware buttons. But overall the Motorola Milestone is one of the best built smartphone devices you can get, and therefore deserves the near-perfect 4,5 stars rating for the hardware review. 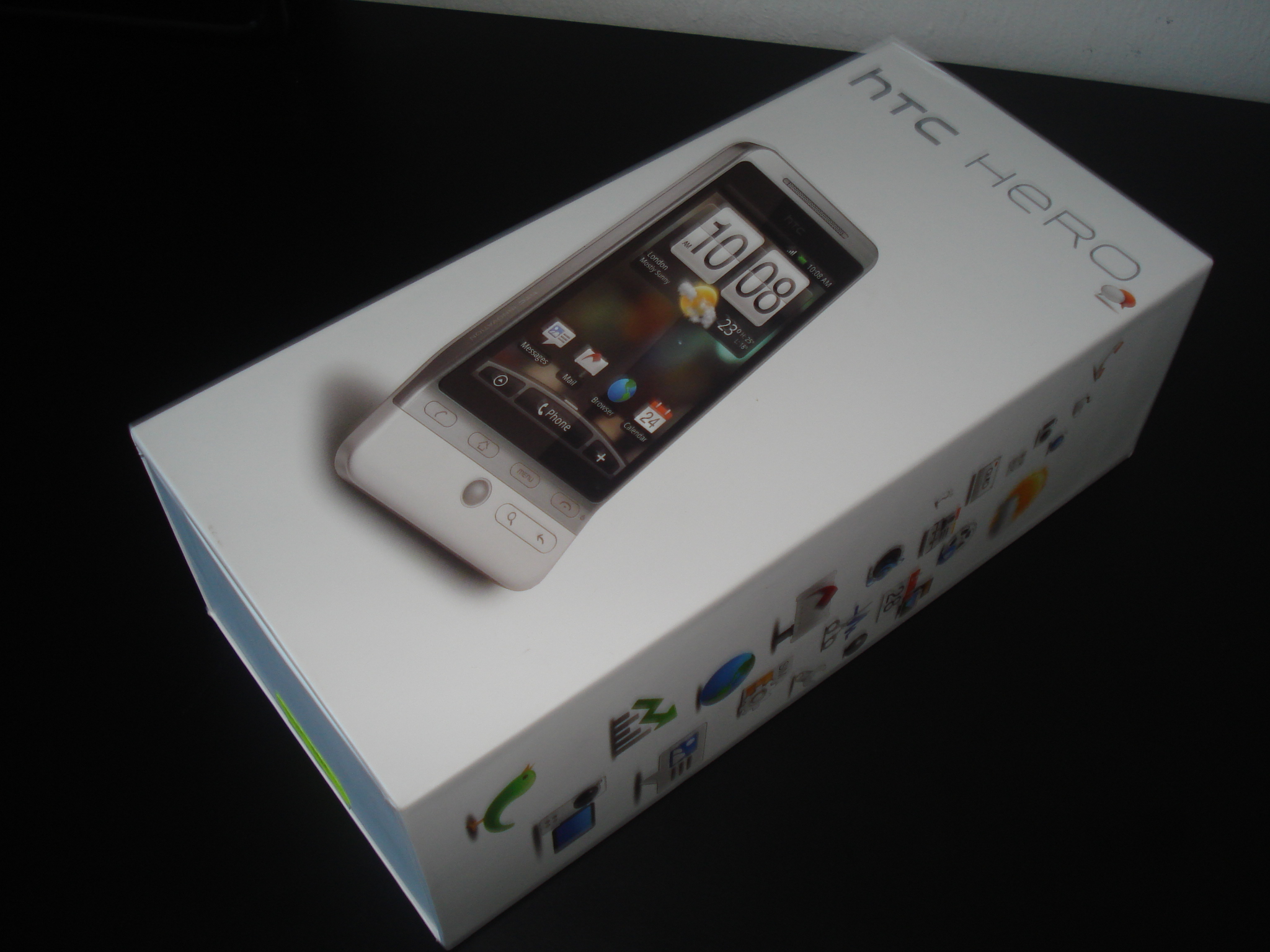