It seems to me that everbody loves the multi-page homescreen of the Iphone nowadays, with all of the app shortcuts on it. And Android devices follow a very similar approach. Just a few weeks ago HTC announced the HTC Hero and introduced the new custom Android UI called HTC Sense, which gives the user even more control of the different homescreen pages and got praised as the first really usable Android device by many websites. But there is one Windows Mobile app called UltimateLaunch, which provided a much deeper homescreen customization level way before any Google Phone or the Iphone did. Forget all the other Windows Mobile apps, which only gave you UI-overlays and only very limited customizing options, UltimateLaunch gives you full control of multiple homescreen pages. It’s the most powerful homescreen configuration tool for Windows Mobile, and easily stands its ground against the competition from Google and Apple.

Let’s start my review of UltimateLaunch with my current homescreen shown on the following screenshot as an example, and then proceed step by step to the deep customizing possibilities. As you can see i still use the HTC Home today plugin, and combine it with calendar plus and the standard tasks plugin.

Up to now this is nothing special, but actually i configured three homescreen pages using UltimateLaunch. I can access the other pages by swiping to the left or right. The next screenshot shows the second page, where i inserted some of my favourite apps. The interesting thing here is, that i specified only the upper half of the screen to switch, so i can see the calendar plugin on every page. This is one of the many great UltimateLaunch features, since you can define which part of the screen should be dynamic.

And here is my third homescreen, with different configuration app shortcuts. It’s possible to set up many more tabs, but for my needs three tabs were enough, and i also didn’t want to push the RAM on my device too much.

But my setup is only one example, since UltimateLaunch provides so many options that you can literally design unlimited different layouts. To give you an impression of the incredible amount of customization possibilities, let’s go through the UltimateLaunch configuration screens. After starting up UltimateLaunch you will see following screen.

The first page shows the current active tabs (homescreen pages), so if you use UltimateLaunch for the first time, the list will be empty until you activate your first tab. My setup consists of one tab with the htc todayscreen plugin, and two other tabs with app shortcuts.

The todayscreen-plugin options include: activating/deactivating “gestures”, autostart of the plugin and the feature to only start the plugin if the tab is currently shown on screen. The “gestures” are used to describe the behaviour of the app when making horizontal or vertical swipes on the touchscreen. Using the “tab” options you can define a name for the page, set up the left/right/top/bottom margins of the plugin, and define whether the current page should be the default page on startup. I’ll desicribe the “gestures” tab a little bit later in detail.

My other two tabs only use app shortcuts, and therefore the setup screen is different than the one used for today plugins. You can add your shortcuts by selecting the appropriate apps, and change the sorting of the apps on the tab. A very cool feature of UltimateLaunch is to combine the two different tab types, so in example you can actually have a page with three app shortcuts and two today plugins running at the same time. This is basically everything HTC introduced with HTC Sense for Android and even more, since you have much more details you can customize with UltimateLaunch and the huge today plugin library from Windows Mobile to choose from. The Android market doesn’t nearly have that vast amount of “widgets” (thats what the today plugins are called on Android OS) currently.

The “gestures” tab is used to define the reaction of the touchscreen on horizontal and vertical swipes. As you can see on the screenshot i chose to keep the default vaule “change the tab” on horizontal swipes, and activated the upwards swipe to open the comm manager. I also use the downward swipe to turn the display off. It’s possible to define the whole set of “gestures” for each tab individually, so in example the upward swipe doesn’t necessarily have to result in the same reaction on all tabs. But i like to keep things simple, so my “gesture” settings are the same for all of my tabs.

Leaving the general “tabs” options, the next panel provides different “display” settings. This is were you can define margins, transparency, as well as the background color and tab header position. Additionally you can define a fix plugin height. I use a fix height so only the upper half of my homescreen will switch on horizontal swipes.

Another nice feature of UltimateLaunch is the possibility to specify what kind of animations should be dispayed when swiping through the homescreens. You can choose between blending, slide, cube, turn and stripe effects. Furthermore it’s possible to set the animation duration and the animation speed.

Actually i don’t use the headers at all, but if you want to have icon headers for each homescreen page you can define them here. This will result in a screen like this screenshot from the official UltimateLaunch homepage. The good thing about headers is that you can directly jump to any header by touching the icon, there is no need to swipe through each screen.

The “behavior” tab provides more options to configure the usage of UltimateLaunch like defining the distances of the swipes (depending on this you have to make longer or shorter swipes) and the return to the default tab after a specific inactivity time intervall.

Of course you can use the default app icons or your own set of icons to change the UI even more. That way you can create really nice themes.

UltimateLaunch really brought the customizing possibilities on Windows Mobile to the next level when it was released, and what makes it even more impressing is that it wasn’t even made by a big company like Apple or HTC but by a very good programmer called Daniel Schumann. UltimateLaunch is one of the must have apps if you want to make the most out of Windows Mobile, and want to realize your own ideas instead of just accepting what other UI plugin developer provide. I tested UltimateLaunch on my XDA Orbit 2 with a qvga screen, and never had any problems with it. So there is no way i could give this great app any less than 4.5 stars, even though some people report to have problems with wvga devices. UltimateLaunch needs a little bit effort to be set up initially, but after you have realized what powerful tool this is you’ll never want to go back. 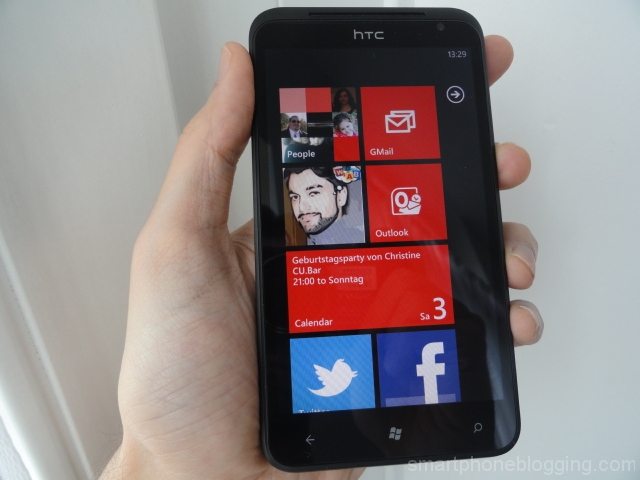